There are about 30 different species of wallabies, a pouched member of the kangaroo family that is native to Australia and surrounding islands. Size varies greatly, depending on the species, but the animals can grow as large as six feet. They have very powerful hind legs and tails. The hind legs are used for hopping and jumping at high rates of speed and covering great distances, and the tails are used for balance and support. But when provoked, wallabies can deliver a fierce kick with their hind legs and a strong swipe with their tail. 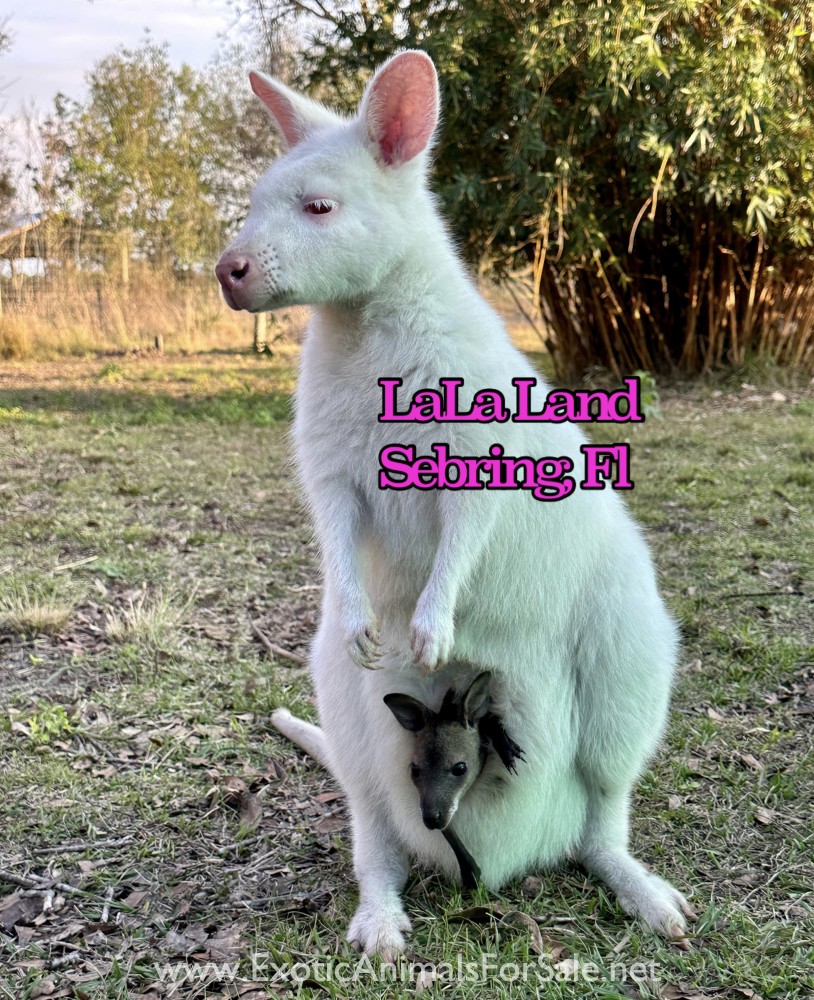 Female Bennett’s wallaby - 6 months old $4850. Are you looking for your next species ambassador? If so, give us a call. Parents on site and tame at our USDA lic. breeding facility. Central Florida We spend time with our macropods everyday and i...

Male Wallaby pulled on January 14th, 2022. Born and hand raised on property. His name is currently Bentley. Must go to a home with an outdoor space with at least a 6 foot tall fence, and a sheltered/indoor space for them. Contact for more information...

Rehoming 3 yr old intact male bennetts wallaby. Located in Battle Creek, MI. PM for more details and rehoming fee if interested. Will not be keeping up with comments on post 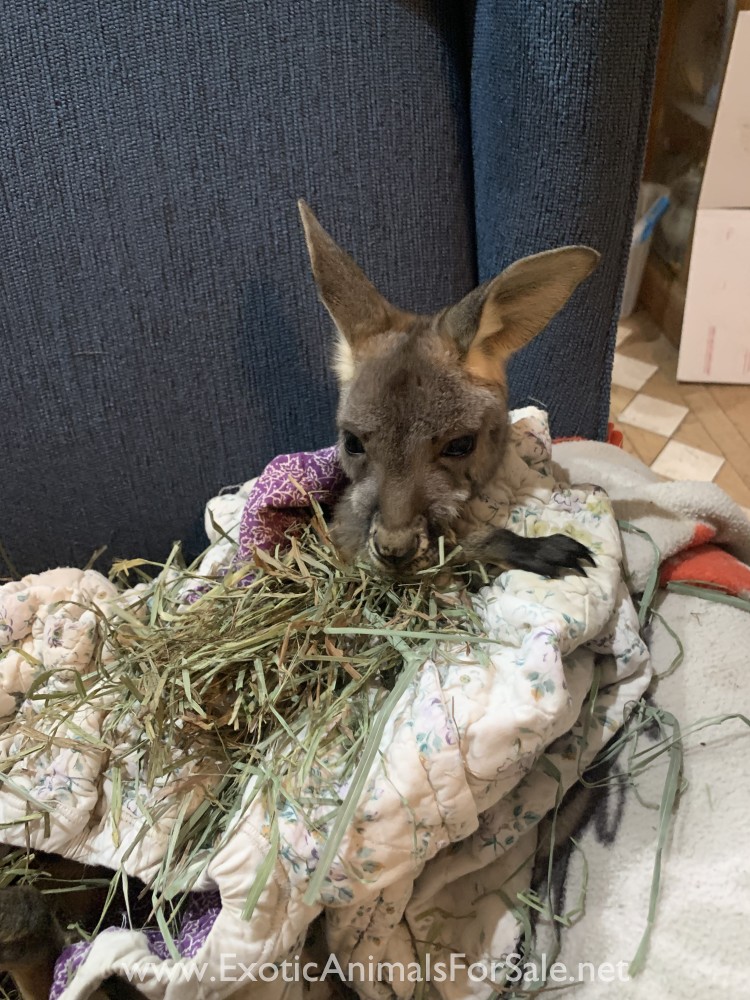 Precious female red kangaroo 7 1/2 month old Joey (born June 5th 2022). She will be ready for her new home by the first week in February or as soon as she is eating her hay and pellets and pooping well. She comes with a vet certificate of health, blo... 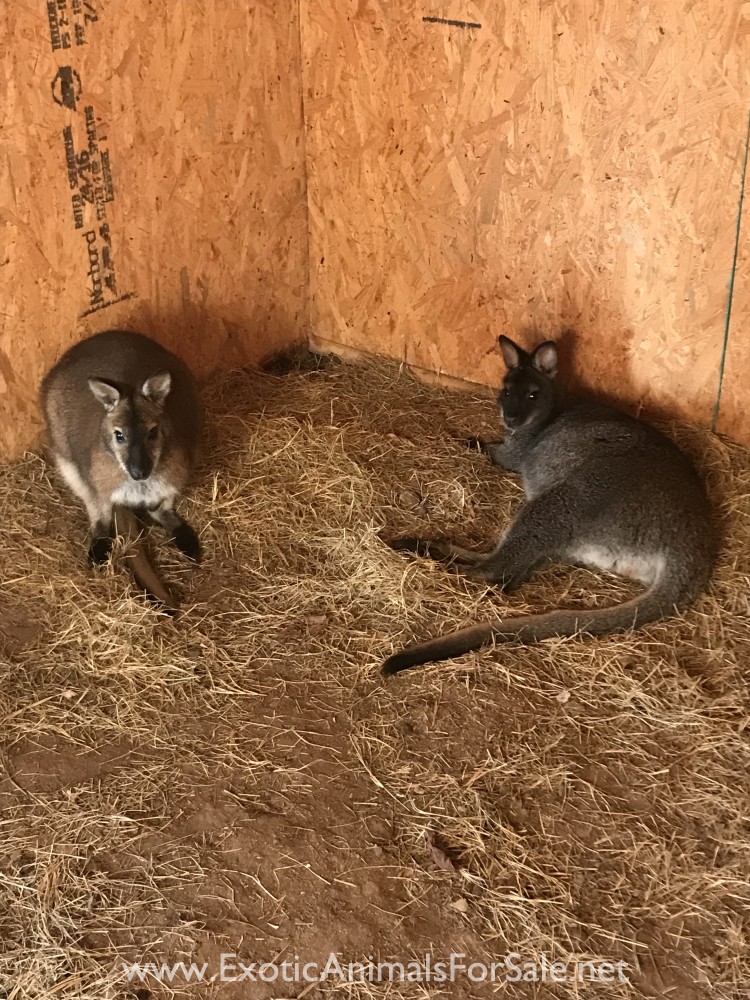 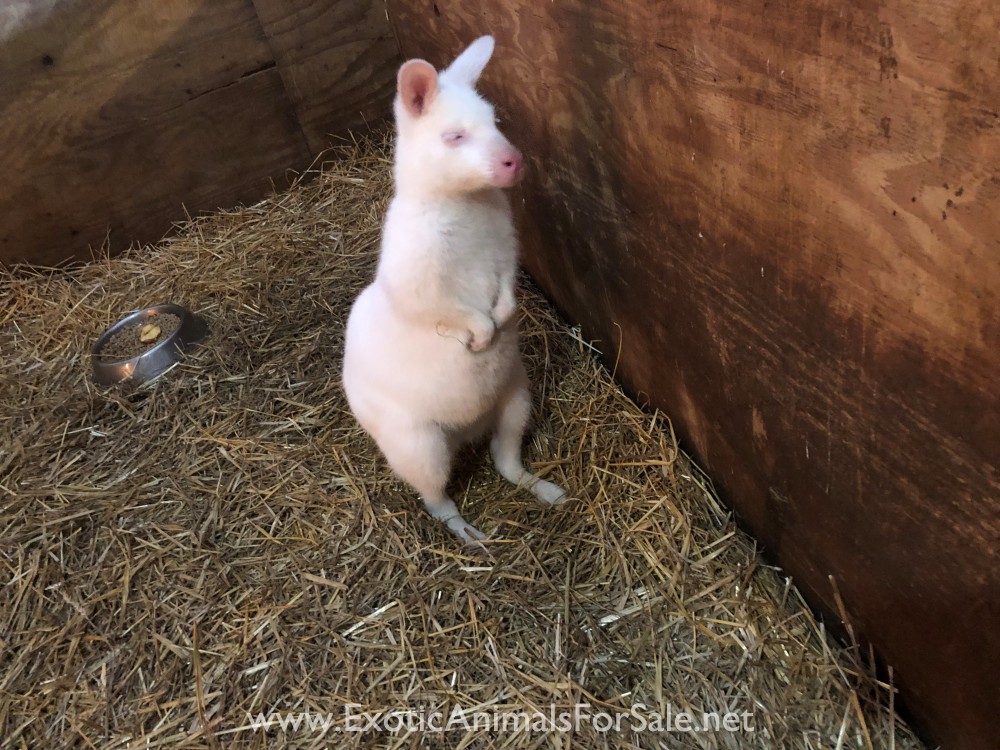 Nigel is a 4 year old neutered male. He is very friendly and easy to work with. He was previously used for educational programs. email for price. No shipping 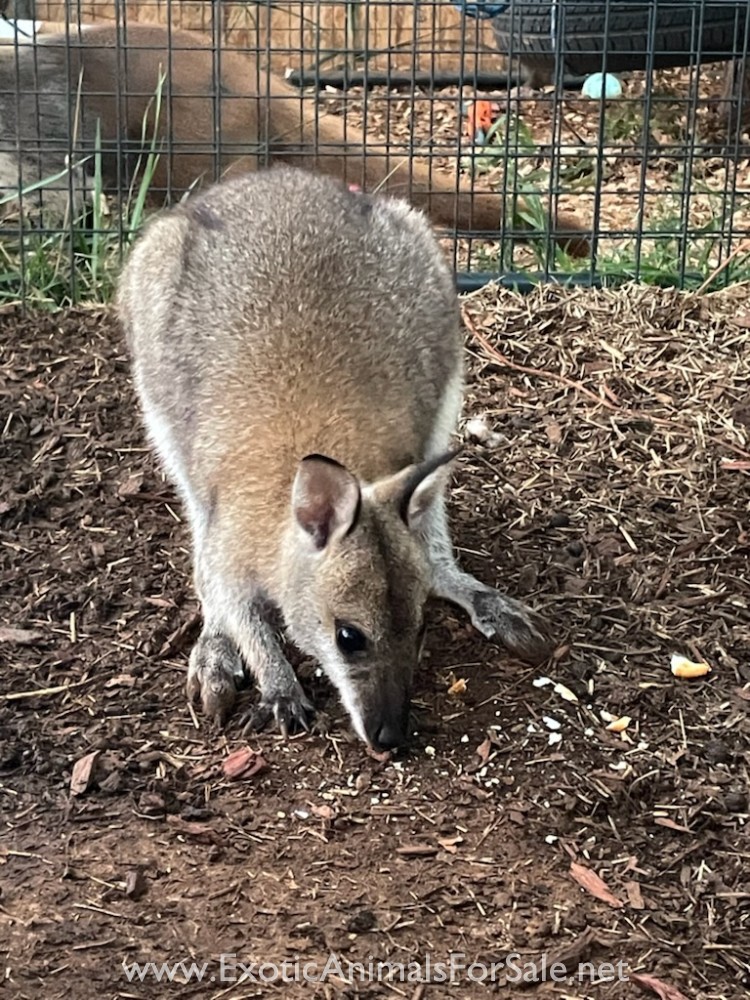 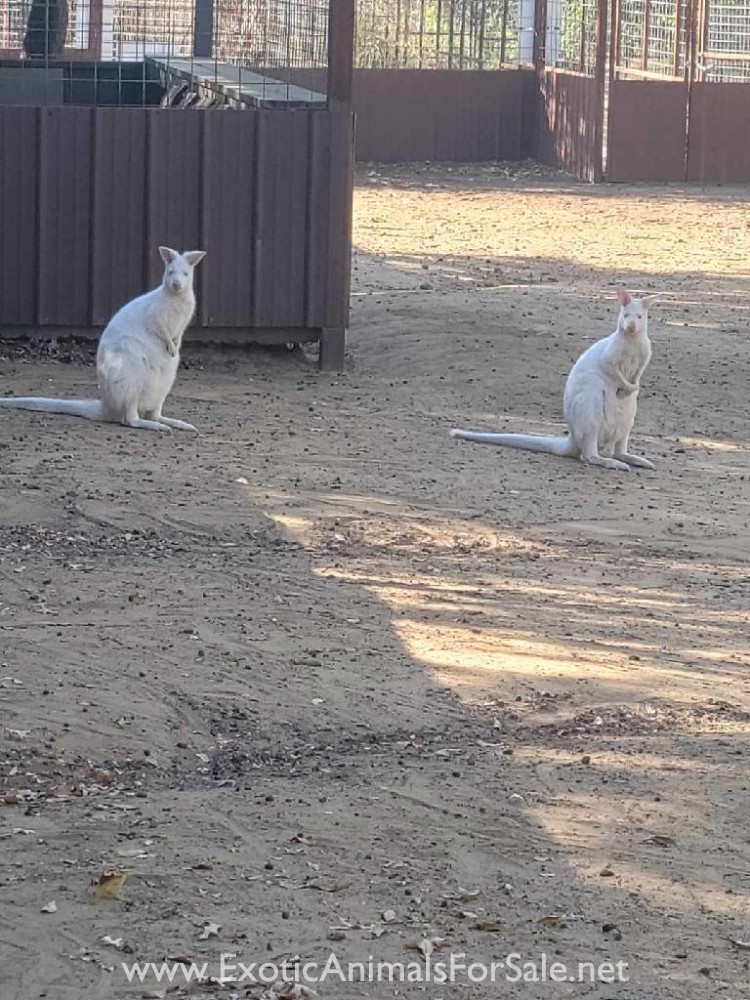 Proven pair of 2-3 yr olds. Imported a year ago from Europe. In our pen with Roos and guests of the park. Not hand tame or pet friendly but get the job done! USDA licensed facility for 34 years. Serious inquiries only. Will not ship in air, ground on...

2 young Bennett Wallaby. These sweethearts are related (they have the same father). They were raised around children and other animals, but they were not raised or housed together. Bentley is the boy. He was pulled on January 14th, 2022 and bottl...

6 month old female Bennett wallaby. Dad is albino so she is split. Eating half a bottle 4 times a day. Still a little shy but is being handled daily 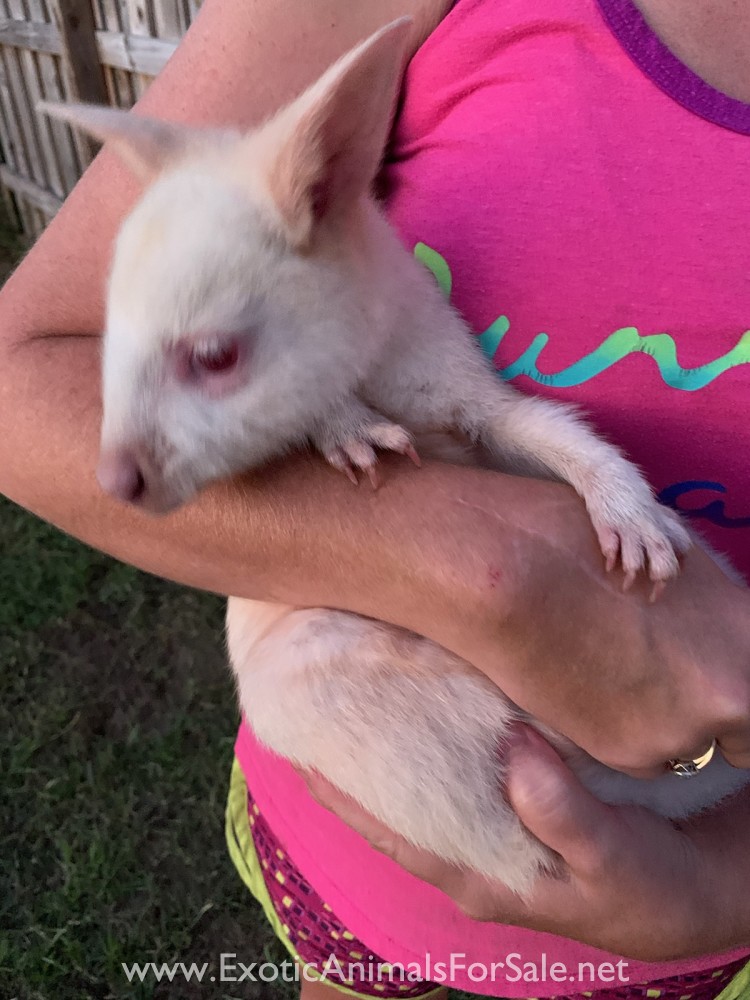 Bottle raised and ready for a new home, he is loving and sweet. Will make a great pet or breeder. Message or call for more information 270-889-1394. 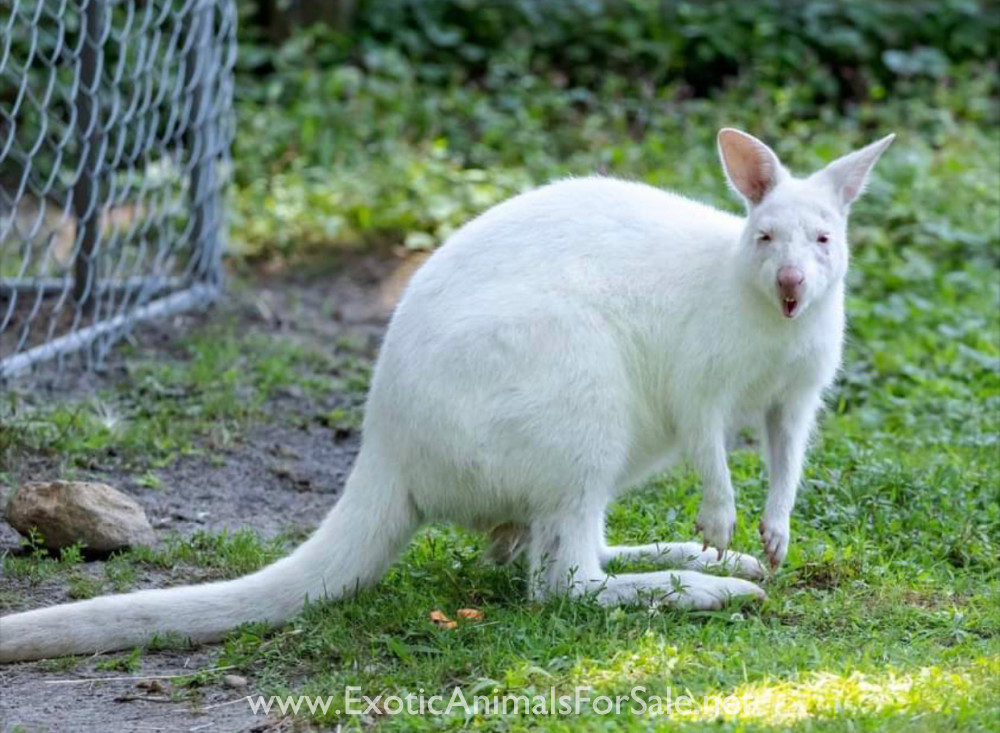 Wallabies are native to Australia, but they have been introduced in New Zealand where they are now widespread. There is also a few small populations of wallabies in the United Kingdom, including about 100 animals on the Isle of Mann, thanks to a zoo escape. Wallabies like to stay in remote areas, hiding in wooded and rugged places and avoiding the open, arid regions that kangaroos prefer. Many of the wallaby species have been named for their preferred habitat: the brush wallaby, the rock wallaby, the shrub wallaby, and so on. In captivity, wallabies can be kept in fenced-in enclosures with grass or clover ground cover. Irrigation systems will help keep the grass green and fresh for foraging.

As herbivores, wallabies mainly eat plant material such as leaves and grasses. An enclosure that has a large, pasture-like grassy area will provide that animals with the majority of their dietary needs, with some supplements of fresh, leafy vegetables and plants.

Wallabies are most active during the day and are largely solitary animals. A few species, however, live in groups of up to 50 animals called mobs. In captivity, food is often an ideal enrichment tool. Apples hung on ropes, a hollowed out pumpkin, or frozen fruit popsicles will all give captive wallabies hours of problem-solving activity, along with addition nutrients.

Wallaby breeding season is in January and February, and after a 28-day gestational period, a single baby, or joey, is born. Like kangaroos and other marsupials, wallaby joeys are born under-developed and stay in their mother’s pouch for at least two months while they continue developing. They are not fully developed until they are seven months old. Wallabies have a life span of about nine years.