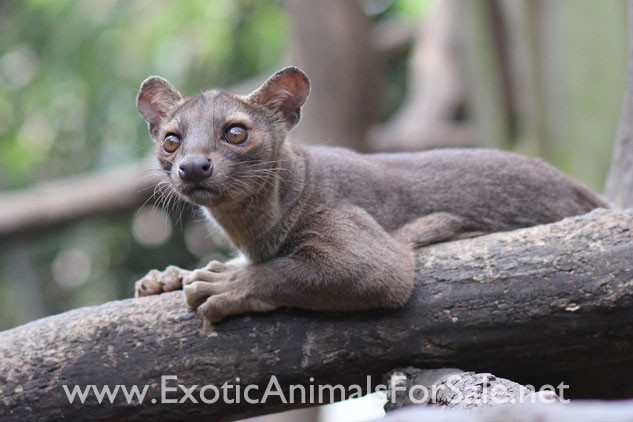 The care and husbandry of fossas. "Fossa cub" by zoofanatic is licensed under CC BY 2.0

Prior to the release of Dreamworks Animation’s successful animated movie Madagascar, it would be rare to find someone who knew what a fossa (or fosa) was. These interesting creatures are also uncommon to see in most zoos. While their appearance is very feline, they are not cats; they are their own unique species and their presence may stir up intrigue. Can these cat-like creatures possibly make good pets, and does anyone even keep them as pets?

What is a Fossa?

Lifespan: Approximately 20 years in captivity [11]
Diet: Carnivorous. They mainly prey on lemurs which composes more than 50% of their diet [4][14], but they also eat reptiles, birds, amphibians and insects [11].
Country of Origin: Madagascar (endemic) [4] and the small island of Saint Marie off the coast of Madagascar [9]. They are the largest endemic mammals living on the island of Madagascar [4] and are found in forested areas [11]. In 2005, there were 2500 individuals surviving on the island nation and they were classified as endangered by the IUCN [4]. Their current status as of 2019 is Vulnerable [7][12], and they are one of the least studied carnivores in the world [2], which is the reason why captivity offers tremendous benefits in gathering basic information of this hard to study species [4].

Fossas are one of those species that biologists have some trouble classifying taxonomically [1][2]. Feline-esque in appearance and morphology, the Malagasy fossa (Cryptoprocta ferox) was originally grouped in the family Viverridae along with genets, binturongs, and certain civets, but later analyses of the species based on DNA/DNA hybridization experiments placed the creature in the family Eupleridae with other Malagasy carnivores such as the Brown-tailed mongoose [4][17]. Due to the species’ isolation as a result of Madagascar’s split from mainland Africa 150 mya [4], their evolutionary history is still the subject of debate [2]. 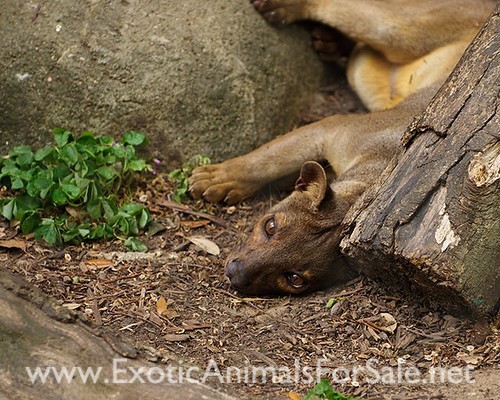 "Cool Fossa" by BFS Man is licensed under CC BY 2.0

Fossas in the Wild

Fossas are primarily crepuscular, however sometimes they can roam during the day [1][11] similarly to domestic cats. They have been described as cathemeral, or having a non-specific activity period, and their time budgets during night or day do not differ significantly between wild and captive fossas [4]. They are also solitary and are not known to have predators [11]. Fossas are excellent climbers being arboreal, but they also spend a lot of time on the ground [1]. They are the only known species that specializes in predating on primates [4].

The range of their breeding season is September to October [11]. Fossas only breed once yearly with a gestation period of 90 days and the young reach independence in 15 to 20 months [11]. Their wild lifespan is unknown, however they have lived as long as 20 years in captivity [11][13].

When hand-raised, fossas have been described as tame by their caretakers for at least the first 2 years of their lives [1]. This understandably changed during breeding seasons and when females were rearing young [1].

It is reasonable to use the domestic cat as a model for conceptualizing the fossa’s nutritional needs due to the similarities of their gastrointestinal tract [15]. In one study, fossas digested a nutritionally complete, raw beef diet more efficiently compared to cats, and they may have higher caloric demands due to their increased activity level [15]. There are many diets that can be fed to fossas as long as they are designed for complete and balanced nutrition, including prepared dog and cat foods as a base, whole eggs, mice, fresh produce, feeder insects, and chicks [3]. It would be ideal to feed various food items multiple times per day with a minimum of 2 feedings per day, and present some of them in novel ways (such as scatter-feeding) [3].

Stereotypic or repetitive behavior in the form of variable pacing appears to be common with captive fossas in zoological facilities and may be a consequence of the animal’s proximity to other fossas, cage space, or their feeding schedule [4]. It has been suggested that increasing enclosure complexity reduces repetitive behaviors and increases exploratory behaviors [4], and sometimes well enriched enclosures can make up for lack of space [3]. This can be important as captive fossas tend to be inactive up to 85% of the day, in comparison to wild fossas, which are only inactive for 30% of their day [13]. Enclosure furnishing should include vegetation, rocks, climbing apparatuses, and other elevated surfaces, as well as ample hiding places [3].

Another suggestion to reduce repetitive behavior and pacing includes housing fossas in compatible pairs in large enclosures [3]; however this solitary species may exhibit aggression [3][13].

Enrichment is essential for the well-being of captive carnivores. In addition to including diverse cage furnishings to a fossa’s enclosure [3], there should be novel enrichment introduced as well, as an unchanging environment may lead to stress and decreased use of the cage space [4]. Easy enrichment for fossas includes “manipulative objects” such as boxes, paper bags, ropes, straw, cat toys, pipes, barrels and many more [3][4][5]. Positive reinforcement training, such as clicker training, may also be important in maintaining active carnivores like fossas [6].

Other forms of enrichment may include scenting. One study involving a single male fossa revealed the animal’s preference for weasel lure, fish oil, and predator bait [2], however even unpleasant scents can be mentally stimulating. Variety is key. 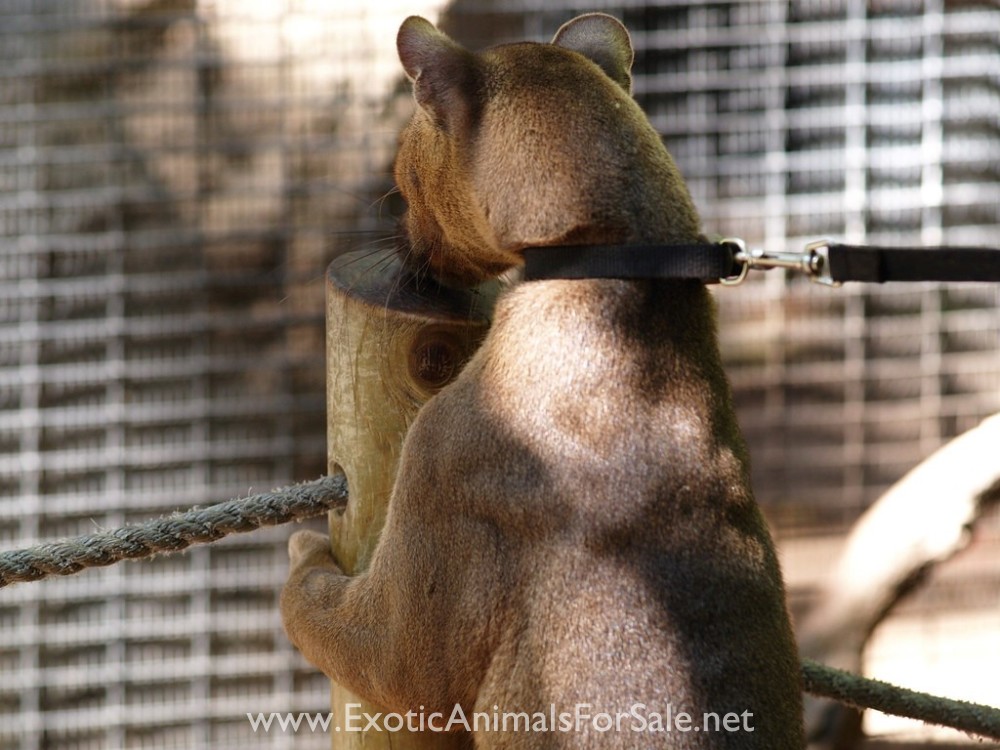 Fossas are listed as CITES Appendix II species and they are listed as Vulnerable by the IUCN [7][12]. Like most mammals from Madagascar, fossas face threats to their population in the wild. While they rarely pose any threat to humans, with perhaps only a few documented cases of attacking captive livestock, they are hunted in their natural range [11]. Like many other threatened species, their populations are harmed by human encroachment to their habitat and forest fragmentation [4][11][12], as well as the bushmeat trade and retaliatory killing due to their predation on chickens [12]. Fossas may compete with introduced feral dogs and cats for prey and these domesticated species may also transmit disease such as toxoplasmosis, which has been recorded in captive fossas [5][12] and canine distemper [14]. 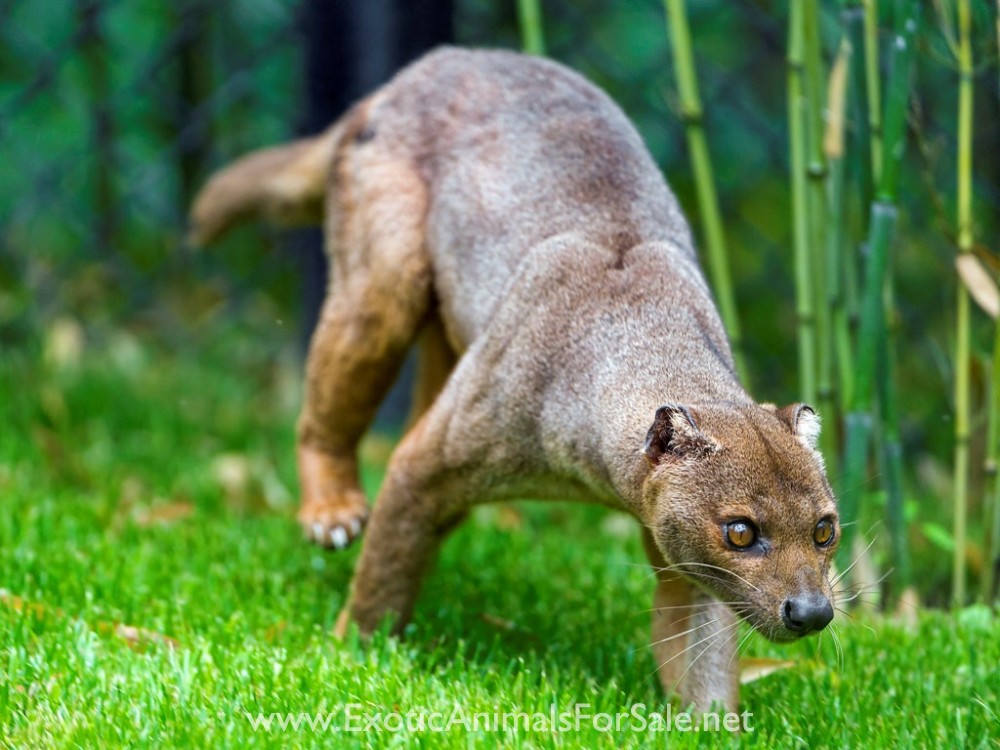 "Frederik the fossa!" by Tambako the Jaguar is licensed under CC BY-ND 2.0

Fossas are incredibly rare in the private sector of the United States, and it is likely that none are kept as traditional pets. This is despite that in 2001, at least 35 fossas (unknown if captive-bred or wild-caught) were exported for the pet trade, and it is claimed fossas were in the American pet trade at some point [4].

There has been at least one licensed, private, breeder of zoological specimens and exotic pets that has attempted to start a breeding program for fossas, but they were unable to secure a mate for the single individual they had. Given this, and the difficultly of importing a rare and threatened species, fossas will likely never have a presence in the private pet trade, although perhaps a small number can be found in non-AZA accredited zoos or with private owners.

Fossas may not breed well enough in captivity to sustain a private population due to the length of time it takes for them to sexually mature and the small number of kits. Fossas have very slow development, and may not breed until 3-4 years of age upon reaching full development [1][4][13][14]. Speculatively, perhaps there is just less public interest in this less well-known carnivore. They likely make poor pets in comparison to other more popular exotic carnivores.

Keeping fossas in captivity has many benefits for research, as like most solitary carnivores they are hard to study, and they also have a unique mating system [8][13], they are important to the ecosystem as apex predators [12], and they are endemic to an island which restricts their population. As zoos do not represent this species as often, it would hypothetically be a good idea to allow fossas to exist and breed outside of accredited zoos, even as pets, to increase their captive population, as long as they are properly managed.