Lemurs are strepsirrhine Primates, identified by their soggy nose or rhinarium. They likewise have a more diminutive cerebrum than equivalently measured simians, huge olfactory projections for scent, a vomeronasal organ to discover pheromones, and a bicornuate uterus with an epitheliochorial placenta. Their eyes hold a reflective layer to enhance their night vision, and their eye attachments incorporate a ring of bone around the eye, however they fail to offer a divider of slender bone behind it. Strepsirrhine primates process their own distinctive vitamin C, thus don't need to get it from their eating regimens. 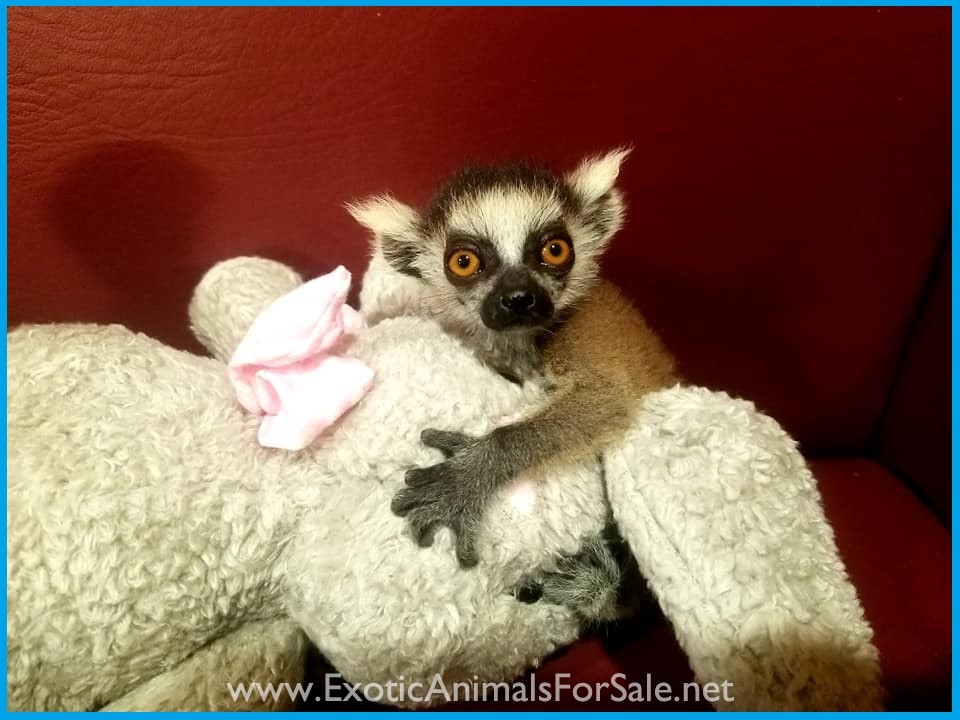 Ringtail Lemurs are to Florida residents only, no exceptions. Seasonal animals which are only available in the spring will be coming up before you know it! Reservations are very limited and once full, that's it for the year. Reserve yours toda... 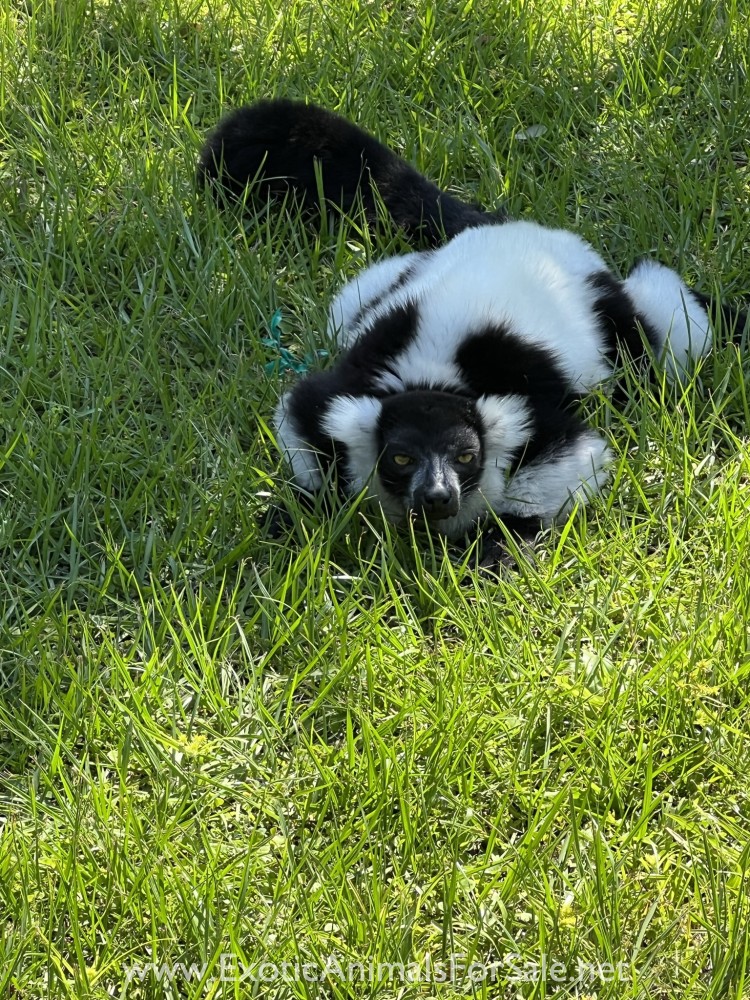 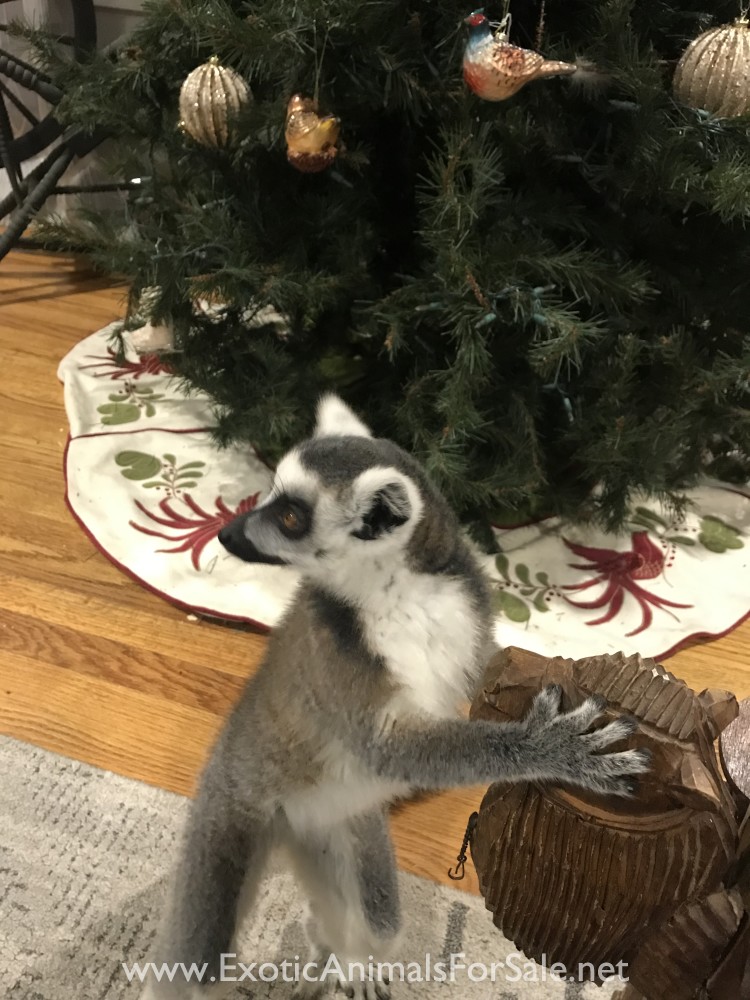 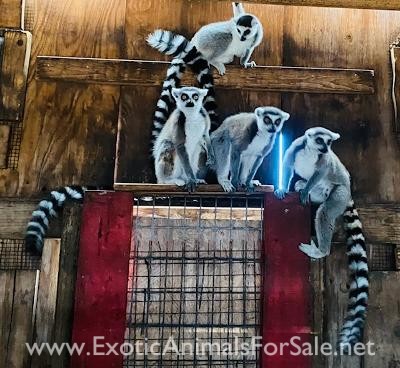 We have 4 Lemurs 2 males an 2 females. The males are unrelated to each other and to the females. The 2 females are twin sisters just turned 3. One is bred and it possible the other is a well. The male big male is 2 years old and the small male is...

I've built up a group of lemurs much bigger than I ever intended. So, I'm just downsizing some. These 2 females are 99% bred for March babies. Both are experienced mothers, and both are parent raised...easy to work around. One of the females is appr...

Adult, Female Ring-Tailed Lemurs. We are dispersing the balance of our Ring-tailed Lemurs to reinvest in other primates. We sold a trio last month, leaving us with our two best breeders/mothers. We would like to place them together. They are both pa... 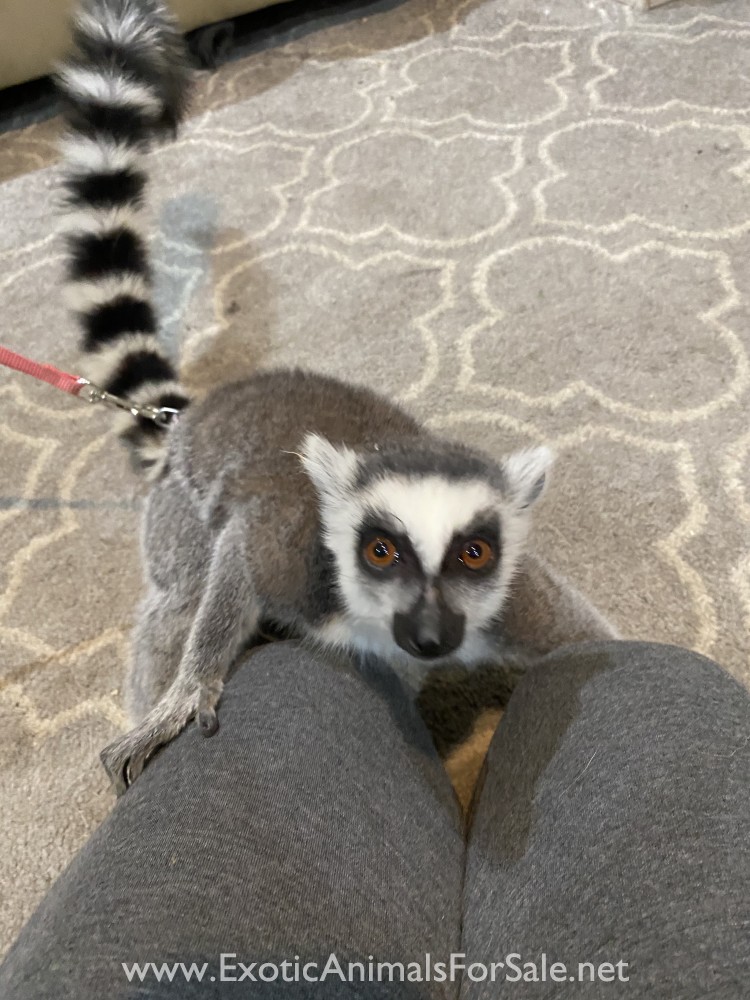 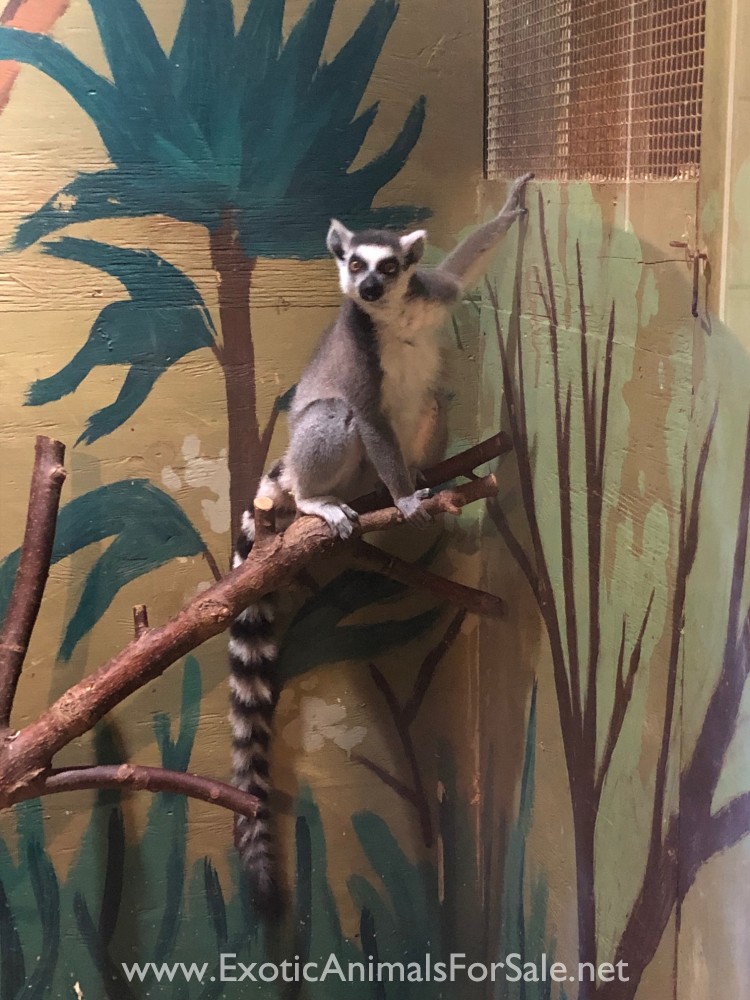 Friendly juvenile neutered male ring-tailed lemur. Was used for educational programs. For sale in state of Illinois only. 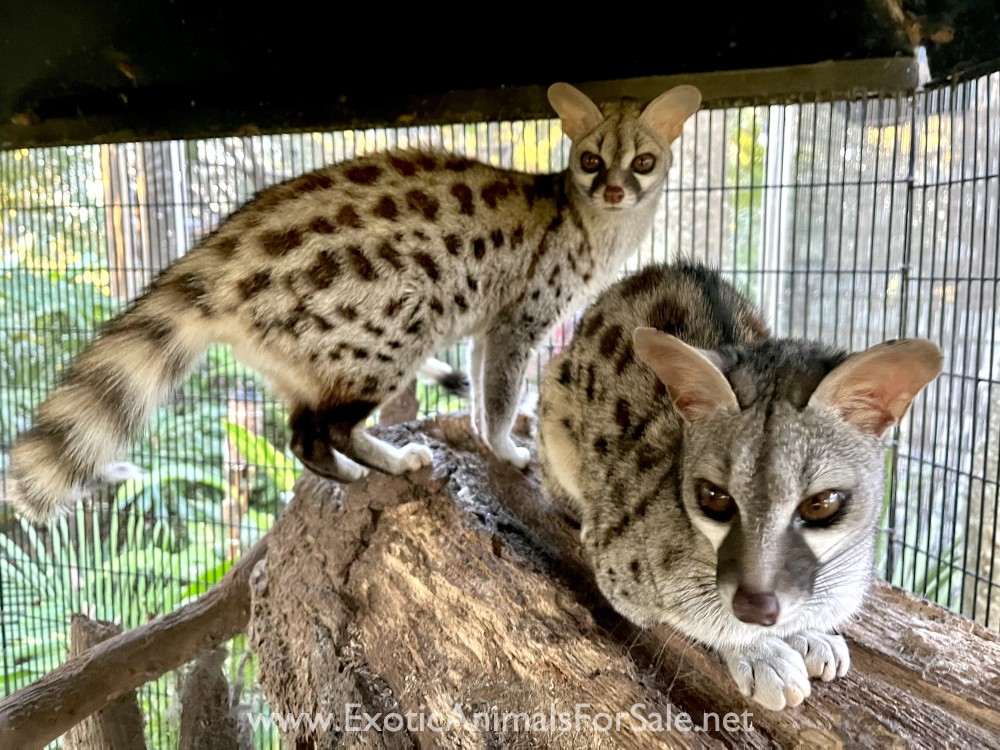 Texas Only I have 2 male ringtailed lemurs available. 4 year old breeder male. (Proven). Was bottle raised, but now best as breeder. Recently vetted and healthy! This years baby 6/7 months old. Parent raised but friendly. Will take food from your... 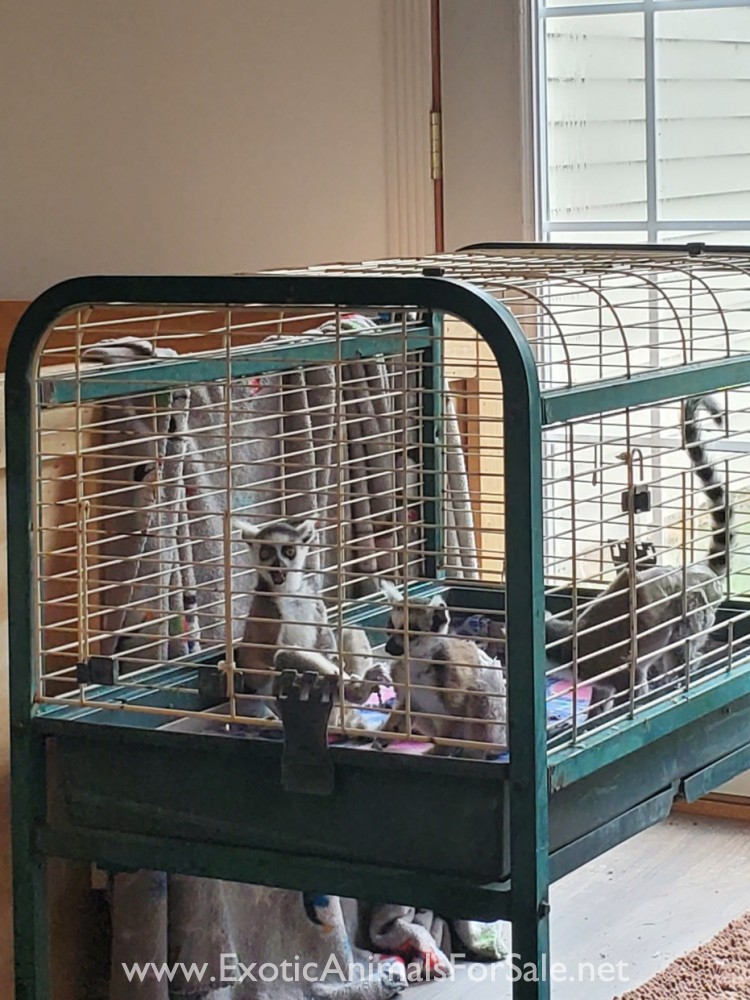 Male & Female Black & White Ruffed Lemur pair, 1yo, parent raised, friendly and will eat from your hand. Please call or text 734-652-8508 for information. 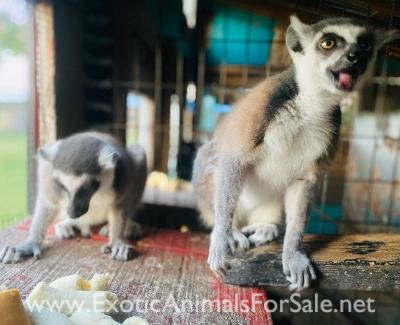 We have a pair of ringtail lemurs that the male is 2 1/2 years old and the female is 3 years old. They will sit next to you and eat from your hand. they are $4500 for the pair. Then we have a 17 months old male that will eat and sit next to you...

They are medium-sized growing to about 70 cm tall at adulthood, with tails almost equal in length with the body. Lemurs have sharp-clawed prehensile feet, which they use to hold on to tree branches. They include the minutest world's primate, the Madame Berthe's mouse lemur, which is the size of the Indri and weighs about 30 grams.

Lemurs, well known for their large, ball-like reflective eyes and wails, have long tails and pointed furry ears. They somehow resemble squirrels and monkeys. They are omnivorous in nature, extracting their food from surrounding trees, but occasionally foraging forest floor for grub. The most common species on the island of Madagascar are; the woolly lemur, ring-tail lemur, russet mouse lemur, white ruffed lemur and the Aye Aye lemur.

Well known Species and subspecies of Lemurs include:

Gray Mouse Lemur
The gray house Lemur resembles a rodent in appearance and also name but is very much a primate.

Black Lemur
The Black lemur has two sub-species, the E. Macaco Lemur and Slader Lemur. They have overlapped and interbred in many locations

Red Ruffed Lemur
This is a medium-sized lemur that is very different socially and prefers isolation. They do not even share feeding zones with the other species.

Coquerel's Sifaka
This species is medium sized and belongs to the primate family. It features a very different physical appearance and behaviour from other lemurs.

Verreaux's Sifaka
Verreaux's Sifaka Lemur is relatively smaller than other species. It resembles numerous small species of monkeys. Consequently, many classify it as a primate.

Golden-Crowned Sifaka
This species is very limited in location and number. Not much information is known about this species

Indri Lemur
this is also known as the Babakoto in many places. Indri Lemur is one of the biggest Lemurs in the world. These lemurs seem to ape many humanistic behaviors and have very distinctive characters.

Ring-Tailed Lemur
This is the best-known and most popular Lemur species from Madagascar. It has a distinctively ringed tail and a body that is uniquely different from the others. It is also one of the most intelligent of all lemur species. The ring-tailed lemur is the most commonly known and studied species. This lemur's tail has distinctive black and white ring marks, but with a gray body fur and ears with white tufts.

Aye-Aye
Aye-Ayes are the largest primate in the world and are nocturnal. Due to its distinct long middle fingers, the Aya Aye lemur appears to be different from the others.

Lemurs can be reared in caged captivity or indoors provided optimal survival temperatures meet. Ideally, these temperatures should be between 65° F - 85° F (18 and 29° C).

Keeping lemurs in captivity may involve restricting them behind cage enclosures, open enclosures and Island enclosures. The ring-tailed lemur for example, requires a cage enclosure of 2.5mm wire diameter and 25mm*25mm maximum dimension of the mesh. Island enclosures on the other hand have a 3.0 m moat width as a minimum, with 0.5 m as the minimal height of the perimeter moat wall. The perimeter moat wall's water should have a minimum depth of 0.9 meters. The moat should have an upward slope facing the land.

When kept indoors as pets, good ventilation should be provided for to allow sufficient airflow. It is advisable that keepers have a good knowledge of handling and husbandry techniques of the species. A second appointed competent handler should be available just in case of owner absenteeism or incapacitation.

Breeding lemurs in captivity is a difficult task due to targeted aggression, which necessitates the forehand removal of males in the mating group. Breeding pairs should also be kept in isolation for guaranteed offspring paternity.

What do lemurs eat?

Lemurs in any form of captivity should be fed with starchy vegetables, fruits, leafy vegetables and greens. Fruits should include bananas, apples, oranges and grapes that are relatively available all year round. Seasonal fruits should also be provided. Vegetables should include cucumbers, green beans, broccoli and celery. Feed Lemurs in captivity once or two times daily. It is important to practice diet rotation to provide variety.

Fresh water availability is necessary. Chopping food into equal portions enables each group member to access preferred food that can comfortably fit into their small mouths. Keepers are supposed to give several times throughout the day and in different tree levels and locations. This effectively restricts aggression and crowding around feeding zones. Diet selectivity and obesity may result from chronic overfeeding. Thus, feeding is planned such that left over or uneaten food should not exceed 15% of the diet.

Lemurs in captivity are sensitive and need optimal veterinary care to survive. Those owning a lemur as a pet or keeping it in captivity, regardless of which type, need to administer annual frequent veterinary health checks to these animals and make any necessary treatments. These checks include;

Other potential health issues for lemurs in captivity include Toxoplasmosis infection transmitted from cat feces. It is advisable to keep cats away from lemurs to avoid possible contamination. Dermatophytosis and Herpes Virus infection/cold sores from human subjects should also be kept in check.