Kinkajous come in various sizes and there are7 subspecies. The bigger varieties of Kinkajous can reach up to 18 pounds in weight, and about 25 inches in body length. Kinkajous tails can be used when climbing because of their grasping capability, which can almost be up to 45 cm. they are primarily arboreal in nature, but anything goes in captivity. Kinkajous can twist their rear feet backwards, so that the clawed toes can be used when descending head-first. Their palms are bare-skinned and front paws are very sensitive. In water or small openings they often dip their front paws and lick the juice or food off their paws. They have poor vision, and can't sense differences in color, so they mainly rely on their well developed senses of smell and touch. They have no noticeable odor to humans although they have scent glands. Kinkajous also have a broad range of signal calls, from barks and shrill quavering screams to soft chatters. They can live up to 30 years of age. 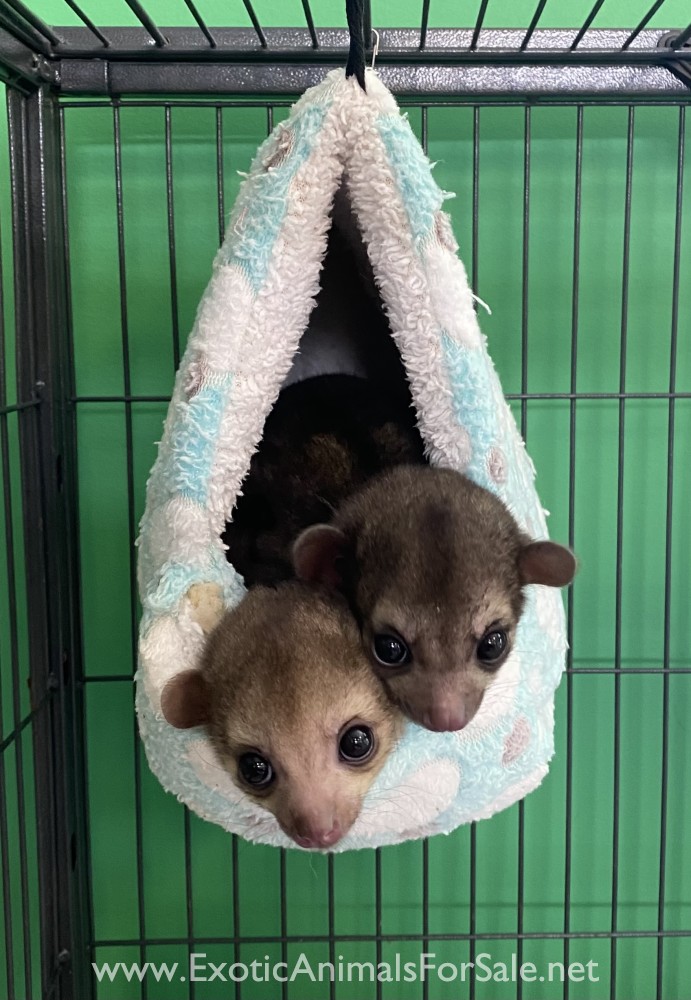 Male Kinkajou 10wks. Been raised in our home around other animals. This guy has a very playful, sweet loving personality and is ready for his new home. We are a licensed USDA facility and he will come with a care package, health certificate and USDA... 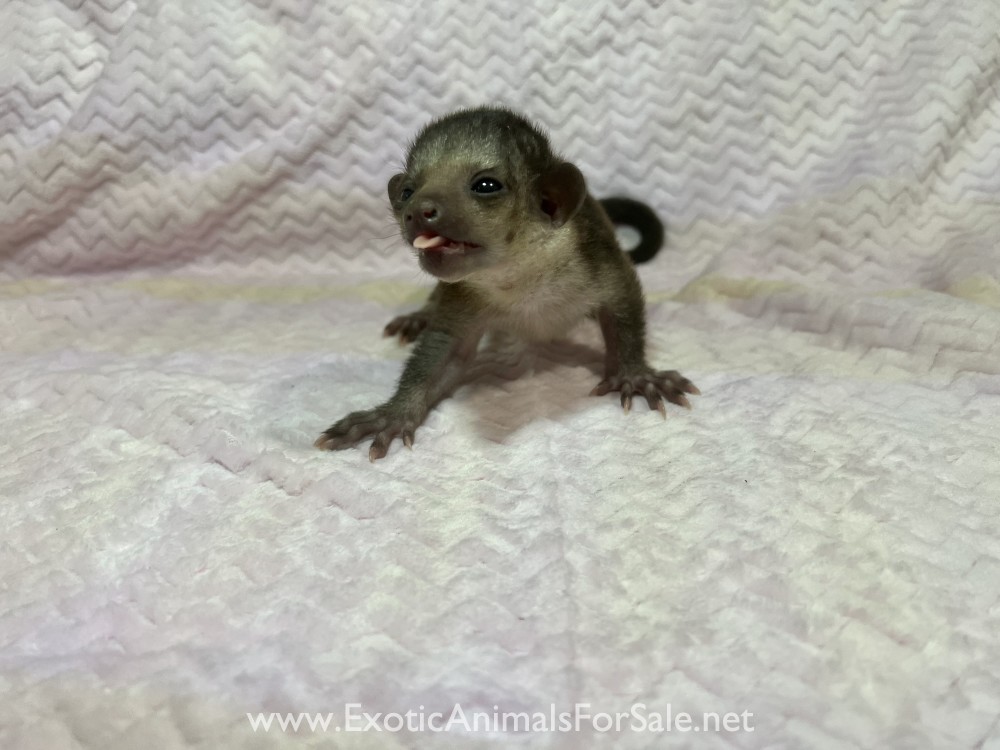 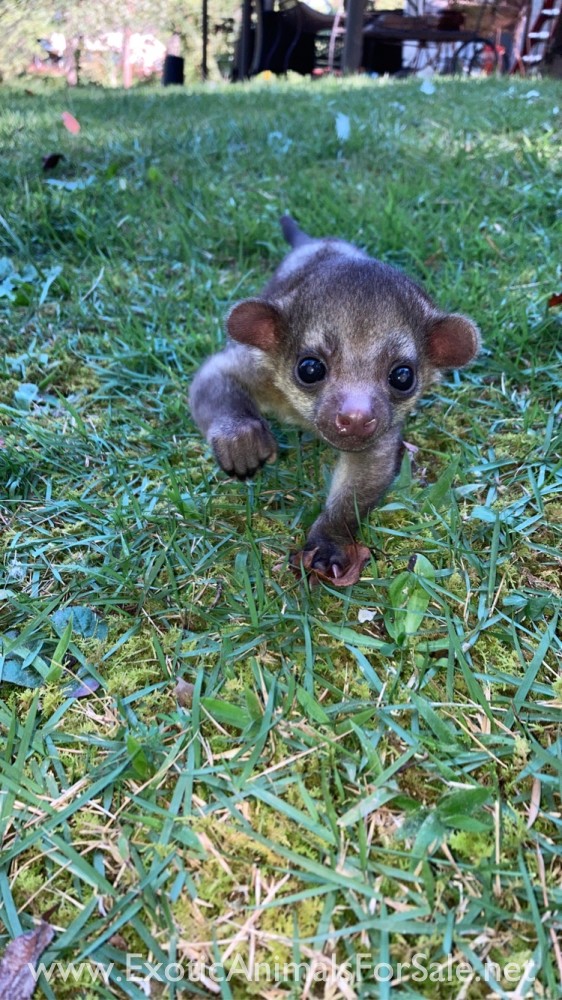 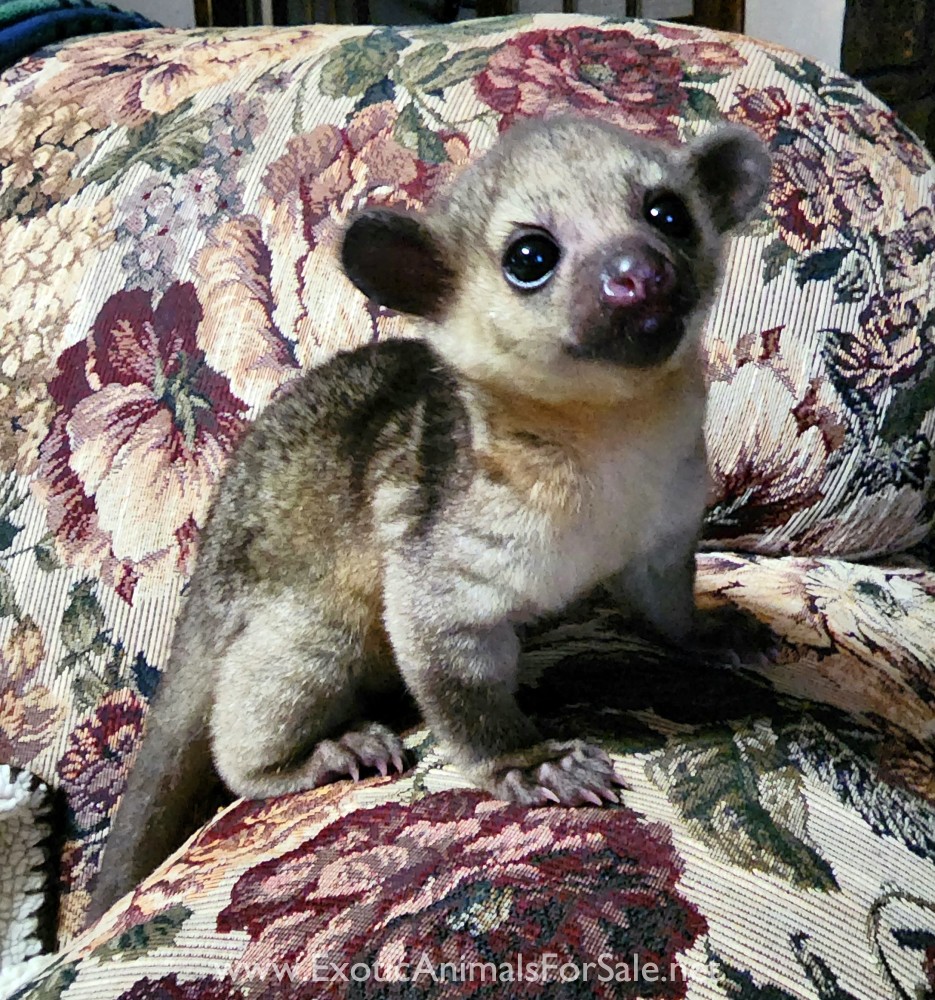 10wk old male, hand raised in our home, around other animals. Very sweet and small boy. USDA licensed facility. This guy will come with a care package and a lifetime of support. 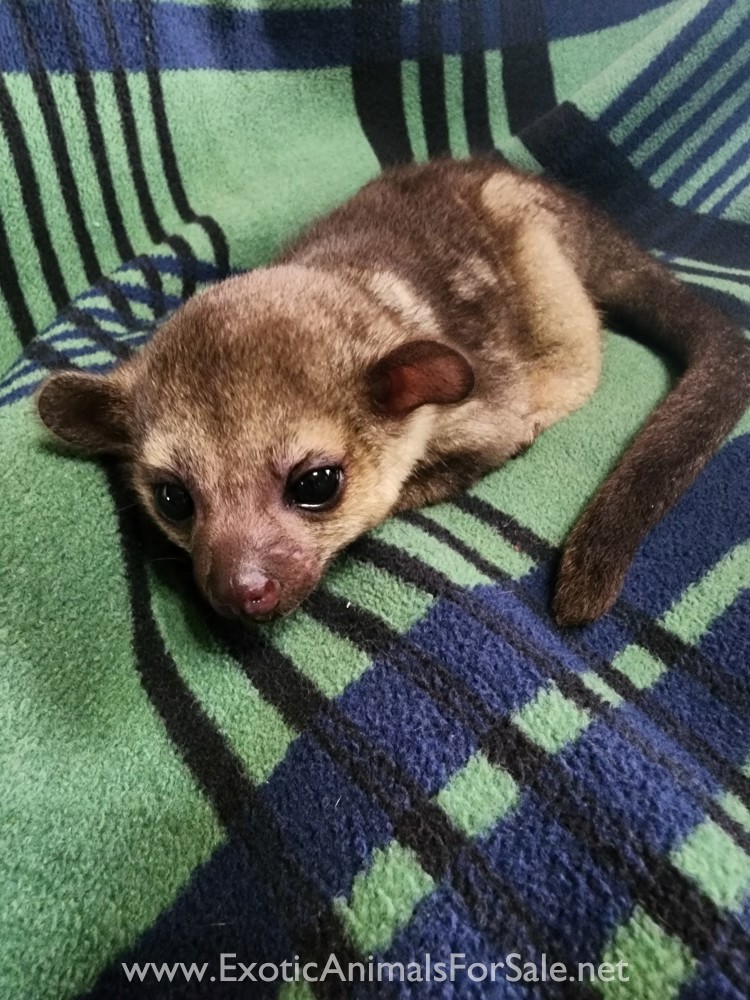 Male Kinkajou, 9wks, eating solid food. This boy is small like his momma, been raised in our home, underfoot. He has been exposed to cats, dogs and older children. Very social and loves to snuggle! USDA facility. This boy will come with a care... 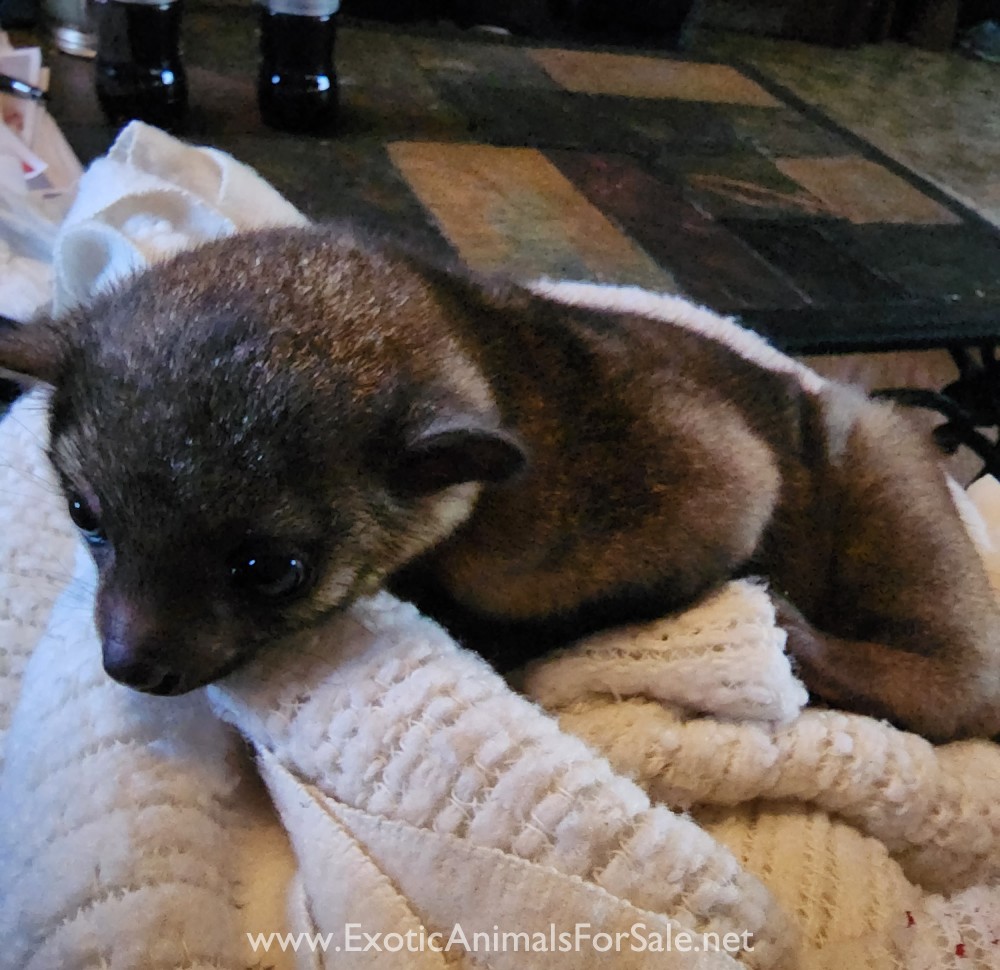 Male Kinkajou ready now. Bottle raised, very sweet and social. Raised in our home around other animals. This baby will come with a care package and a lifetime of support. We are a licensed USDA facility.

Hi, I have a male kinkajou for sale. He have 2 years old. He is in perfect condition, perfect health. He like other kinkajous. I am located near to Montreal in Québec. I can ship everywhere in Canada. Find out about the laws if you can have one w... 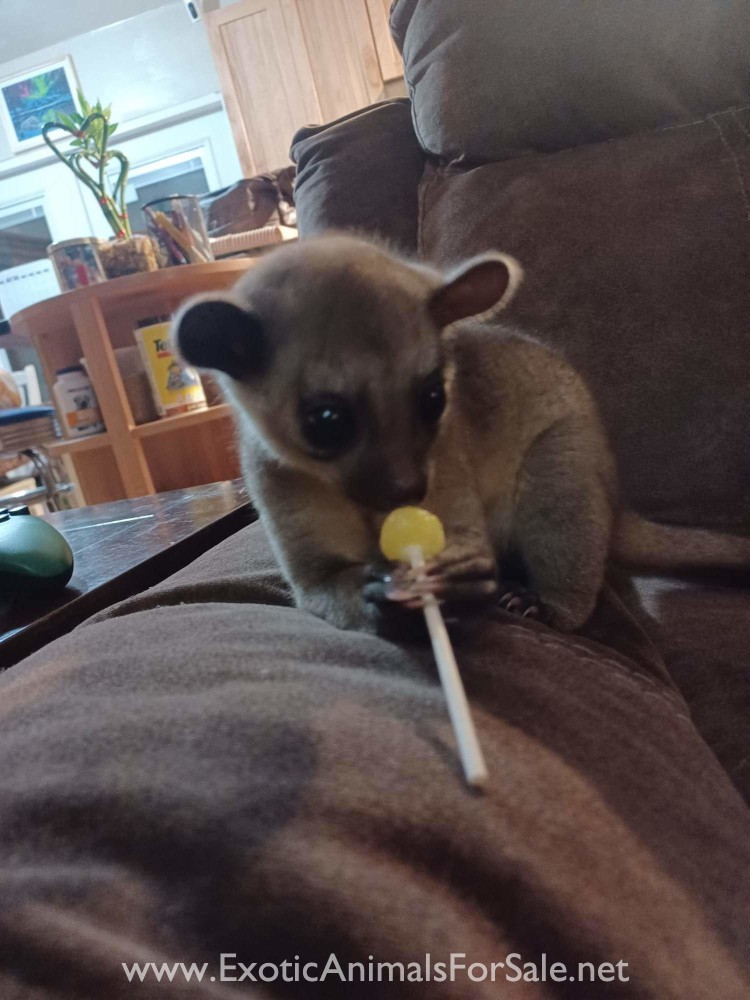 very cute and playful. Healthy baby girl. Perfect pet or educational or both. Please know the laws in your area. More photos on request. Text for more information Sorry no shipping.

Male kinkajou in tact. 9 years old. Someone with experience that can work with him. He is a bit aggressive. Very quiet compared to most kinkajous. $1,200 Local pick up only Located in FL 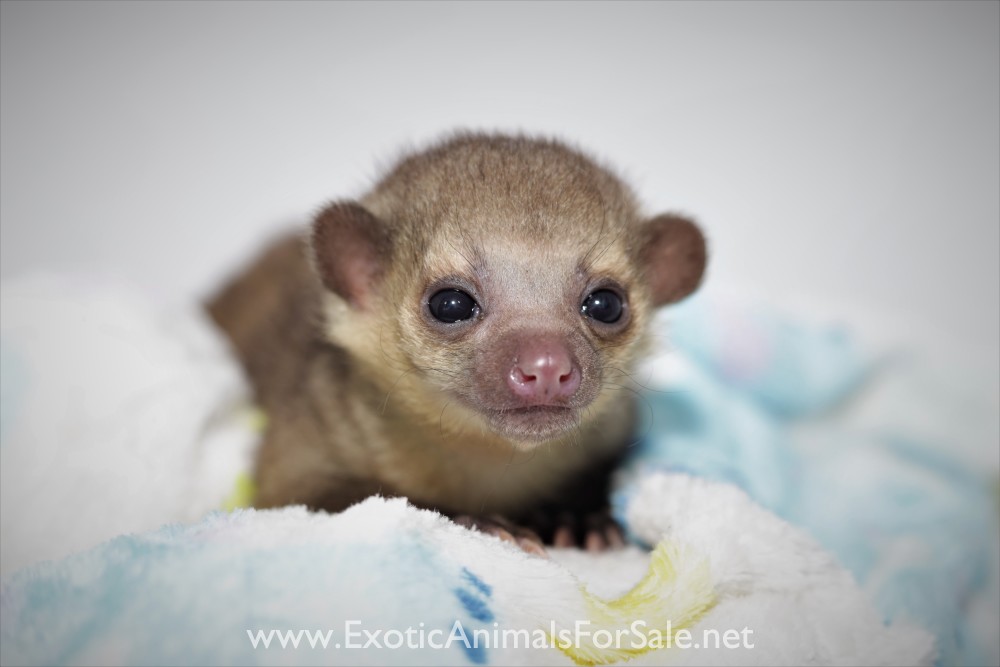 Hello, we are TreeTop Exotics and we specialize in exotic pets! We have a Male and a Female Kinkajou available. They're hand raised and hand fed daily this makes them very friendly and use to human touch. They are soon ready to go to their new for... 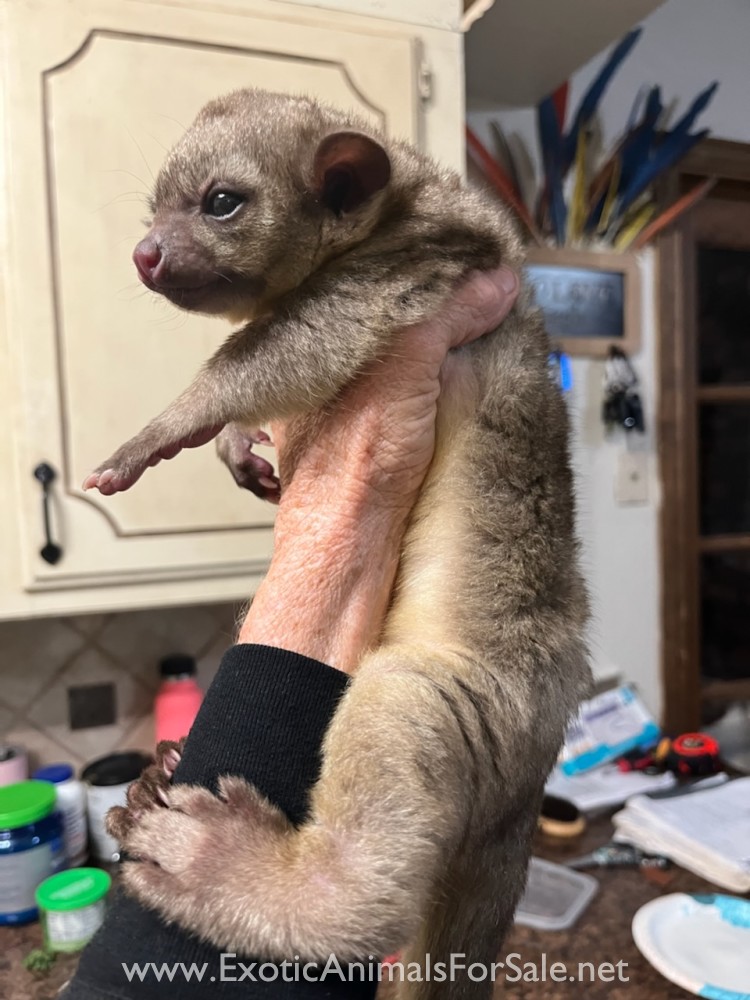 At 18 to 30 months a kinkajou is sexually mature. At about 1.5 years (about 18 months) Male kinkajous reach sexual maturity, females in 2.5 years (about 30 months). In approximately every three months the female kinkajou goes into heat. They give birth to only one or two cubs per year. The gestation period ranges from three to four months and more often only one cub is born at a time. In the wild they give birth between April and December, and they keep away from each other except when mating. The mating rite comprise of the male nipping and sniffing the female's lower chin and gorge. The male then stimulates the females by using the insides of his writs to rub her sides where he has an enlarged, protruding bone. The female also has this bone but on the male it is not covered with fur.

Kinkajous in captivity can give birth all through the year, to usually one cub and occasionally two. Breeding in captivity can last between 98 to 120 days. The cub is born in a dark den and with grayish hair, its ears and eyes closed, and a bare underside. In general one offspring is produced, but twins do occur occasionally.

Although they are primarily nocturnal and arboreal in the wild, in captivity they will fool around on the ground, and they will sleep well in the night if you spend a lot of time playing and socializing with them in the day. Kinkajous can make wonderful pets because they are beautiful animals, their personalities are sweet, often playful and yet docile. They are often kept in the house without a cage because they are not destructive animals. They are generally docile and quiet, and they have no noticeable odor. Because they are indolent and slow, especially after being woke from a sleep, they don’t particularly like rapid sudden movements. They are non-aggressive and gentle most of the time, although they can get wound up and become quite playful, and pounce on you from high places.

There are seven subspecies of kinkajou:

Kinkajous are indigenous to the warm humid lowland rainforests of south and Central America where temperatures range from the upper 70s to 100 degrees, their housing temperatures should never drop below 70 degrees Fahrenheit.

During construction the floors of the cage of the floors should be covered with a solid material to prevent damage to the animals’ feet. Kinkajous have a high level of agility and learn by observation. The cages must be protected by key operated locks because they learn to open bolts and other closure devices. The cages must be able to withstand the climbing and digging, therefore it is advisable that the fence have a buried wire fitted at a 90 degree angle to the vertical to avoid the animals tunneling out. Outdoor enclosures must have a roof. If kept outdoors kinkajou should have limitless access to an indoor housing area because they are a tropical species.

Natural lighting is essential for this group of animal, with a regular day and night cycle. Kinkajous are nocturnal and will be most active after dusk. An appropriate form of ventilation must be provided if the animals are kept indoors. The drainage of outdoor enclosures must be able to quickly remove all excess water. Drains should be planned to keep away injuries to the animals, and positioned in a manner not to obstruct their movement. Other than drains that carry surface water, others should be outside the enclosure. Any fecal material must be disposed of in an environmentally sound manner. For indoor enclosures the substrate should be easily cleaned or changeable.

Fresh fruits and vegetables along with Zupreem monkey biscuits are the main part of a kinkajous diet. Other Treats include fig newton, dates or raisin and graham cracker may be given. Since they are classified as carnivores occasionally a person can add other protein sources such as small amounts of meat like chicken, eggs and hams. Bananas are their favorite fruit, but other fruits can be added. Many people also feed kinkajou with a variety of other foods and sweets in small doses but not chocolates. Citrus fruits are not a proper nutrition to the kinkajou. There is also belief that Kinkajous are allergic to strawberries.

There are many susceptible diseases to the kinkajou. They need vaccines starting at the age of 6 weeks until about 16 weeks of age, and all the vaccines are boosted annually. They are vaccinated from various diseases such as;

Internal parasites are a concern and routine fecal exams can give you an idea if they have picked up something that needs to be dealt with specifically. They can carry a specific type of round worm, Baylisascaris, which is very contagious to people and can cause brain and eye damage among other concerns. Because of this they you should be de-wormed regularly even if fecal tests come back negative. Their teeth suffer because of the high sugar contained which makes them build plaque and tartar easily. Regular teeth brushing also benefit them. Teaching a kinkajou to brush requires the same steps as that of a dog or cat.