Cougars, a member of the big cat family that also includes tigers and lions, go by several different names such as panther, mountain lion, puma, and catamount. At one time, cougars roamed across most of North and South America from southeastern Alaska to southern Chile and Argentina. They have the largest natural distribution of any land animal in the Western Hemisphere. Cougars are found in mountain forests, swamplands, grassy prairies, and tropical forests. 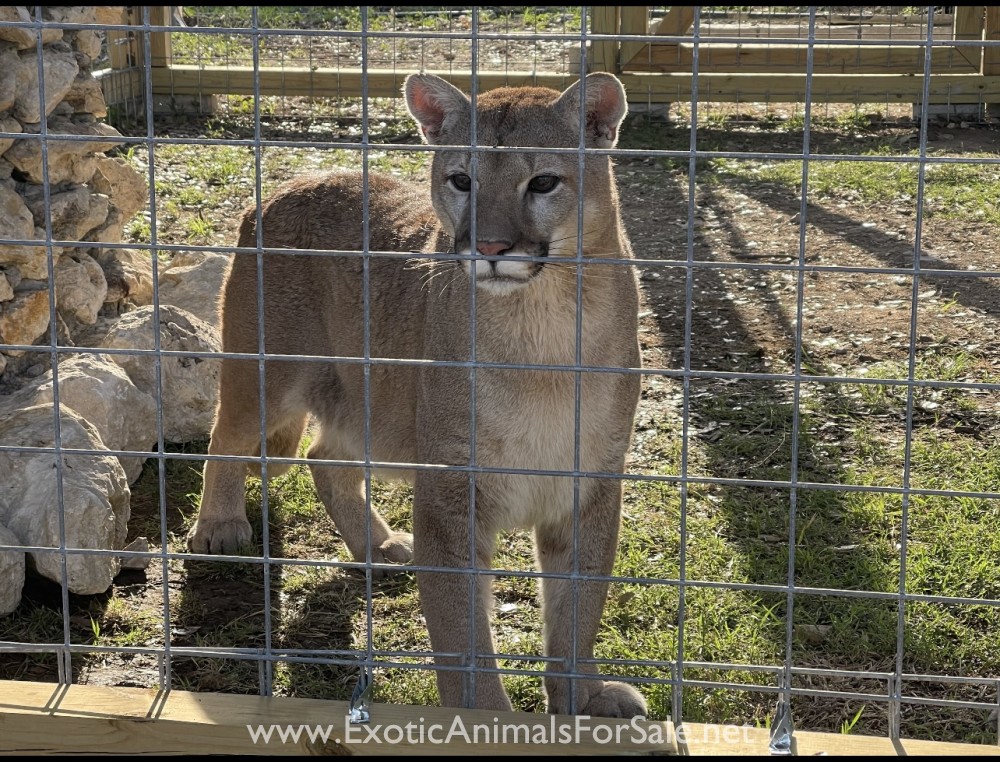 Our Cougar Noxen is approximately four years old, but isn’t a pet and would be only considered an exhibit only. We are a USDA license facility and will only sale or trade to a USDA license or facility.

Big cats like cougars need large, spacious outdoor cages, or enclosures. Because cougars are wild, predatory animals, safety of the keepers is paramount. Doors and gates on the enclosure should be securely locked at all times. Enclosures should have a roof over them to prevent the animal from escaping.

Cougars are carnivores and require a large amount of raw meat every day. Commercial feline, or large cat, food can also be given. These mixtures typically contain ground chicken, bones and added vitamins.

Cougars in captivity thrive when provided with mental and physical stimulation and enrichment. Introducing new items or food will pique the animal’s curiosity. Rocks, logs, or ledges give cougars a place to sun themselves. Balls and toys will get their attention, too. A hollowed out pumpkin will give them hours of fun.

Male and female cougars spend very little time together before and after mating. Once the female becomes pregnant, the male plays no role in raising the baby. Most cougars reach adulthood by the time they are two years old. The gestational period for the cougar is about 92 days. The mothers deliver one to four kittens, though most of the time, two babies are born. The kittens are blind and helpless at first, but soon they accompany their mother on hunts. Once they reach the age of two, they are generally on their own.