Chinchilla (chinchilla lanigera) is a member of the rodent family. They are native to western Chile. In the foothills of the Andes Mountains. Chinchillas have very thick, soft, silky fur. Their fur protects them from the bitter cold environment of the mountains. Having this dense coat makes it easy for them to overheat. They do well at 75 degrees and below. The natural coat color is a blue-gray with the underside being a cream/yellowish color. There are many other coat colors available due to captive breeding. The hair on the tail is longer than the body. The males will weigh 14 to 17.5 ounces. The females weigh 14 to 21 ounces. Their body length is 8 to 15 inches and the tail is another 3 to 6 inches long. The chinchilla's life span is 8-10 years in the wild and 15-20 years in captivity. 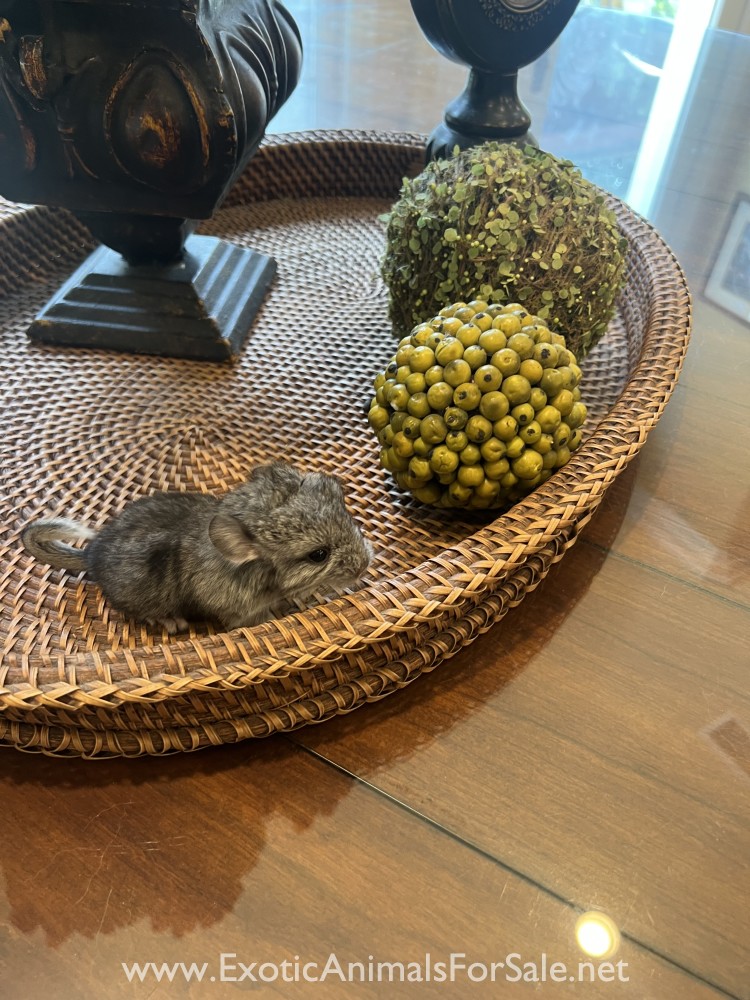 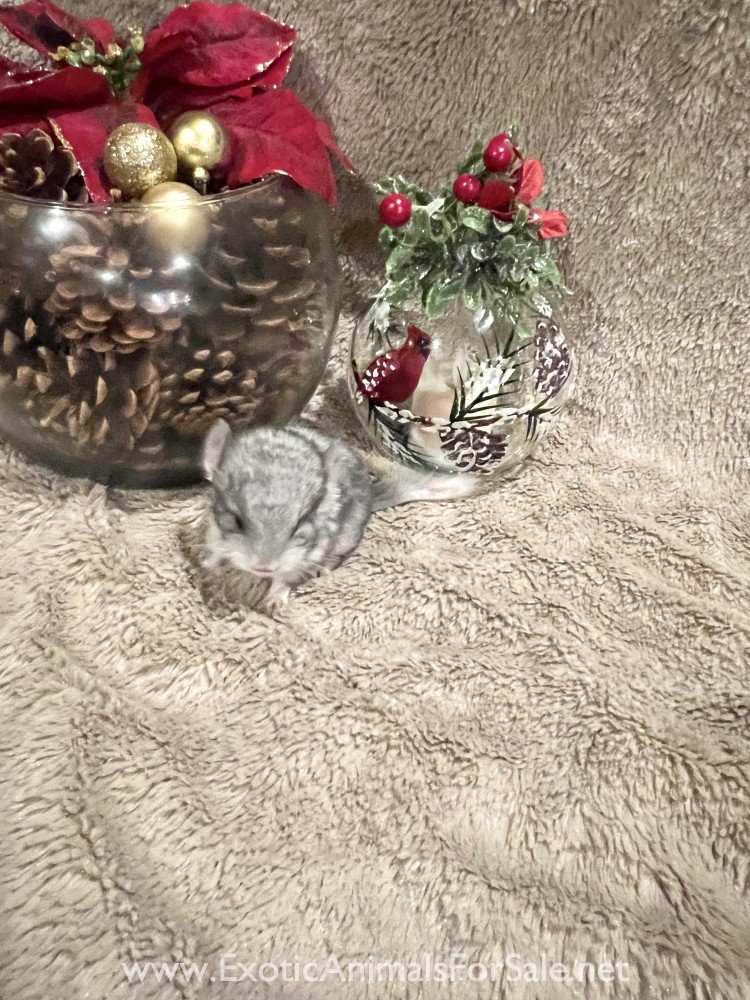 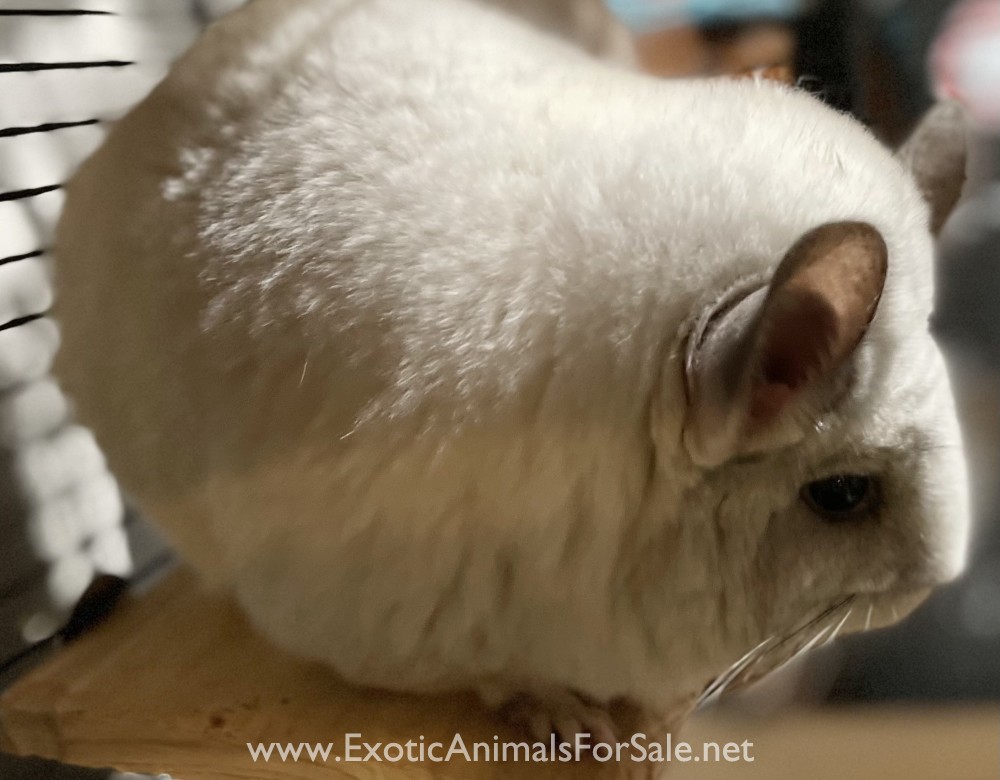 Beautiful white with ebony loving chinchilla! She is ready for her forever home, just under a year old, she loves treats and her dust baths! She is available along with her cage mate, also a female and she is beige.exotic beauty!! 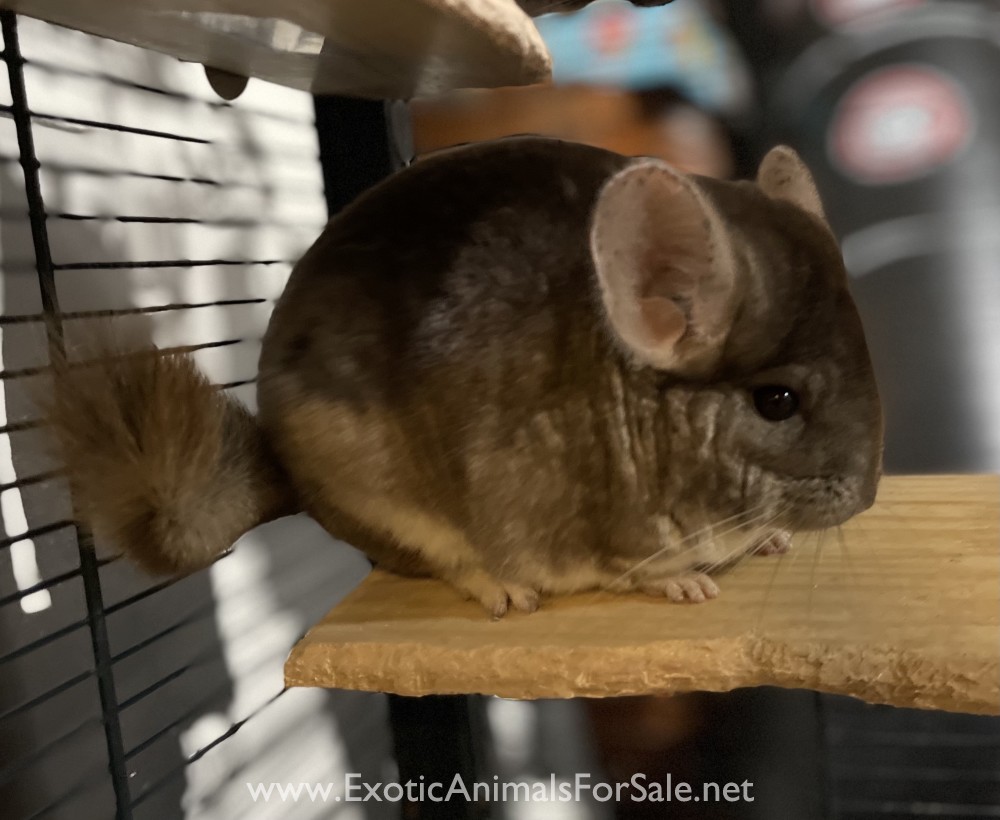 Super adorable beige female chinchilla, she has pink ears! This little cutie is up for adoption and looking for her forever home! She is soft, well cared for and loved and ready to be loved by you! Her cage mate is also up for adoption, and they woul... 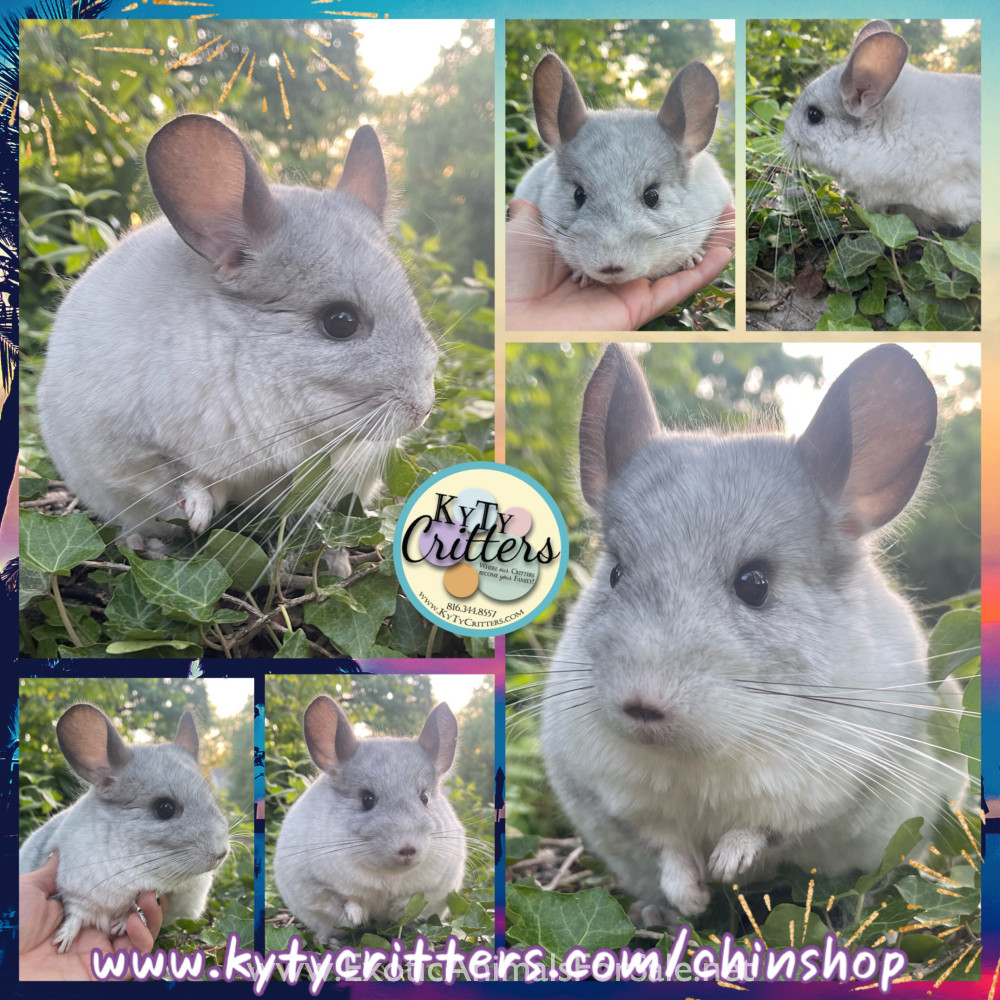 Adorable baby chinchillas! We offer Lifetime support for any questions or concerns you have!!! For more information (including SHIPPING, AVAILABILITY, PHOTOS, PRICES & MORE) please visit our website: www.kytycritters.com Please check out...

Hugo the Chinchilla for Sale

I need to add photos later today! Hugo, is a great little guy, we have had him 4 years and he is very healthy. Teenagers are just getting older and do not have the time to commit to his loving care! He needs a new home where he will be well taken... 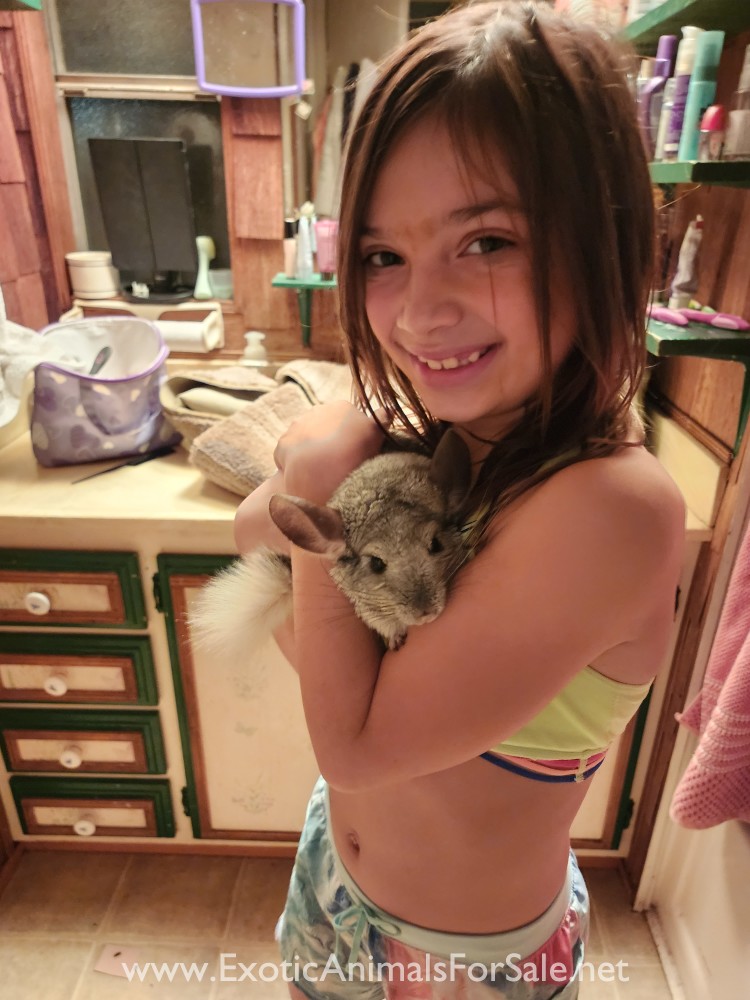 4 females and 1 male chinchilla for sale. They are crossed with Mosaic White (mother) and Black Velvet (father). Buyer must have knowledge of chinchilla's care and sensitive diet. Please feel free to email or call with any questions. 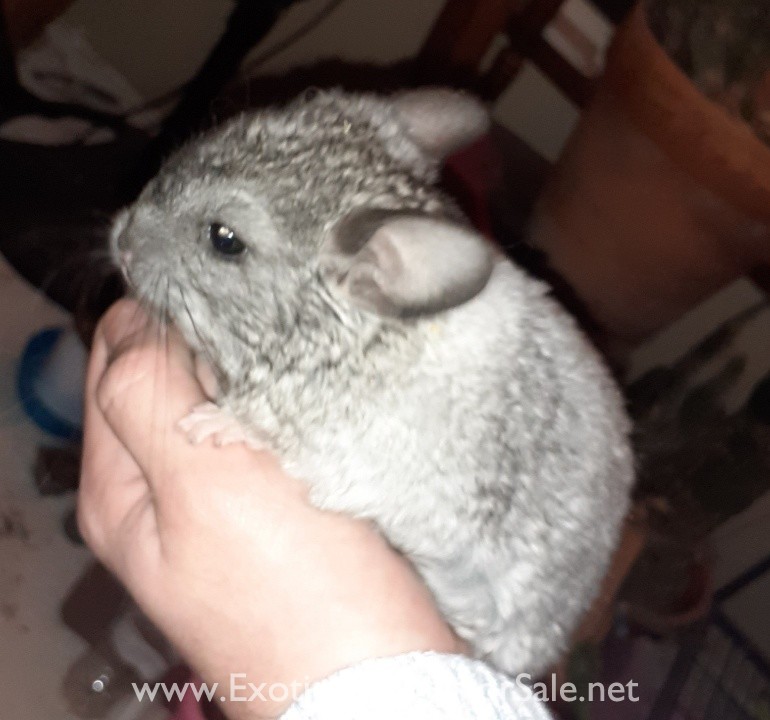 I have 2 female baby chinchilla’s ready for their new homes. Please call or text for more information 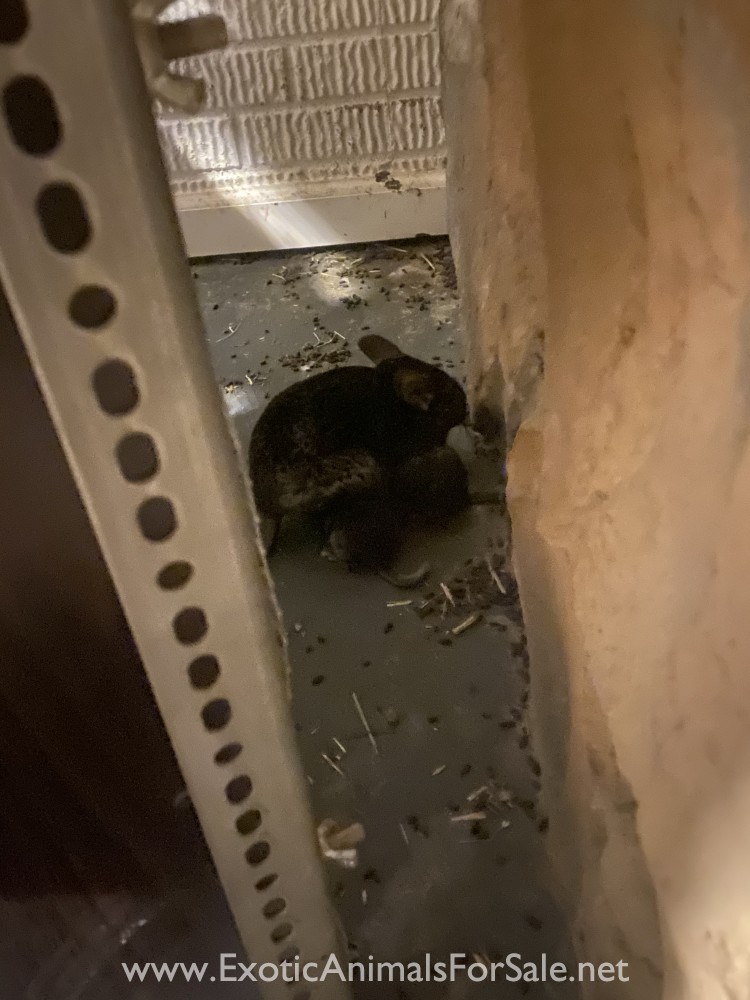 A bonded couple that must stay together. Chilly is a proud mama of three litters with Bobby. They’re both super friendly, never even tried to bite me, and docile being held. They don’t come with a cage. They’re both around 3 years old. As long as the... 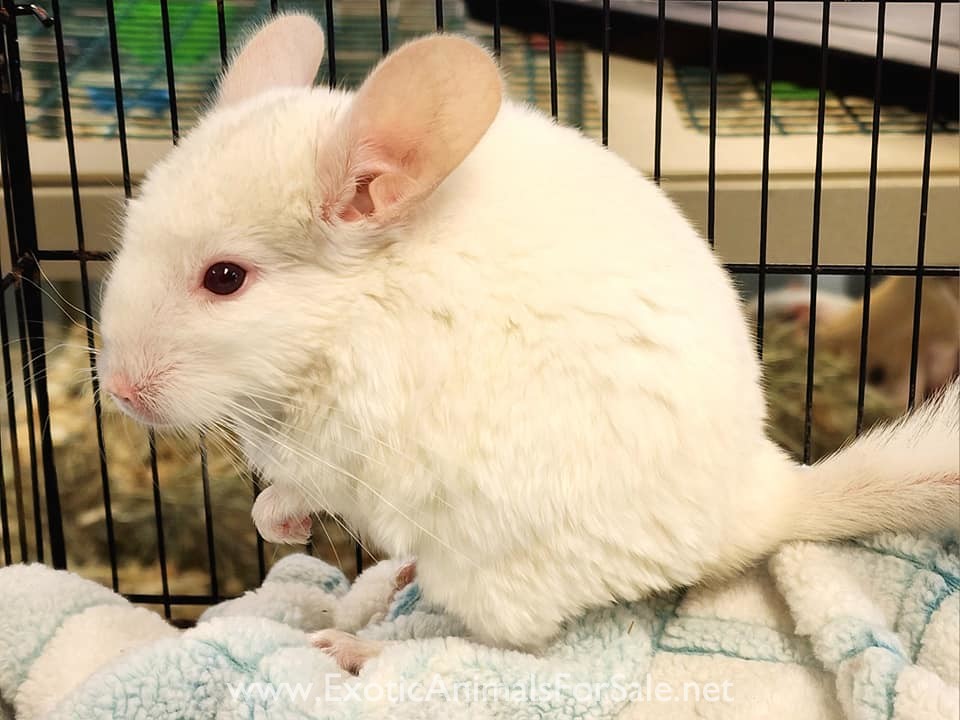 Beautiful Chinchillas in store and ready now! Step one of our adoption process, follow simple instructions. We no longer reply to emails from this website, the majority are kicked back as undeliverable. We are more than happy to answer any quest...

Boy Chinchilla about 2 years old. My son is starting college and no longer has the time to care for him. Very nice boy was purchased from Petco. We want to place him in a good home. Chinchillas generally do not like small children, so if you have... 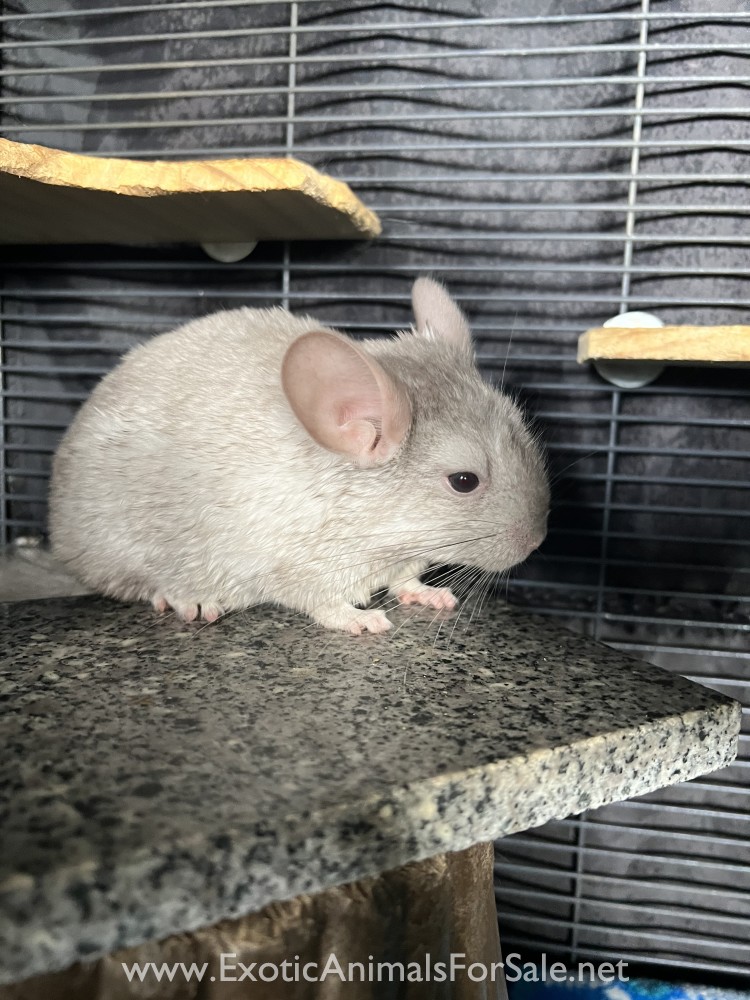 I have a male, beige, chinchilla kit and a male pink white chinchilla kit.   Both very sweet and from beautiful parents. Parents are a chocolate mom and mosaic tan dad. Also have mosaic female kit from a mosaic mom and ebony father. All parents a... 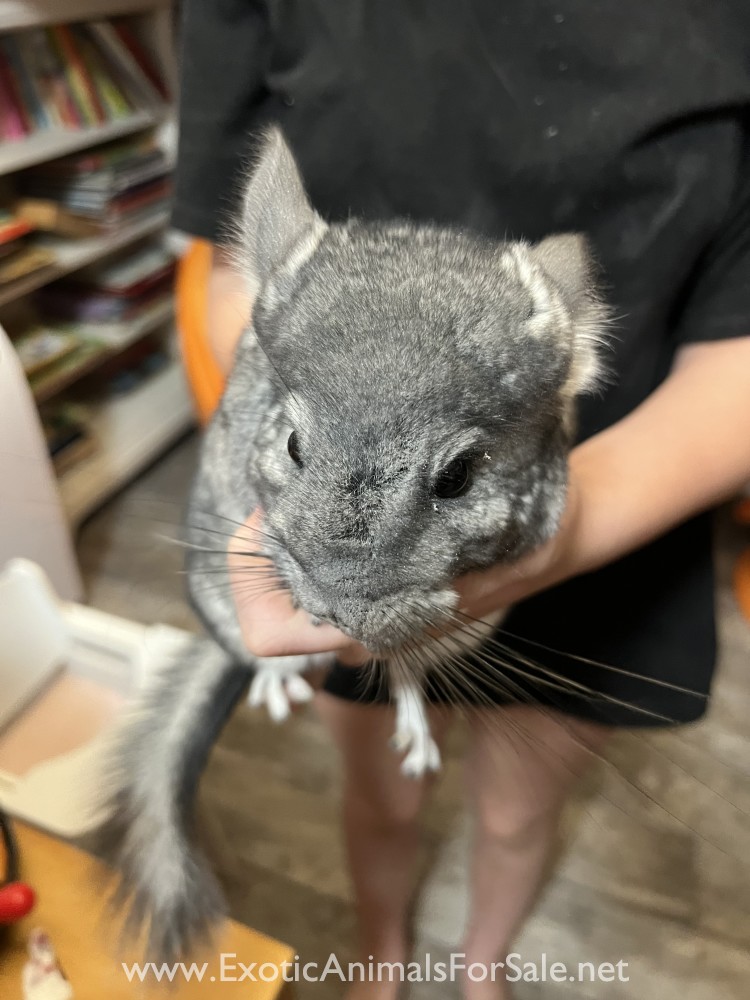 Two bonded chinchilla males. They are six months old and come with the Chinchilla Mansion from Quality Cage Crafters. They also come with a custom wooden dust bath and all cage attachments including the Chinchilla Wheel, which they love! Please let m...

Chinchillas will live in colonies of a handful of individuals to a 100 or more individuals in the wild. They are active at night and take shelter in caves and crevices during the day. They eat vegetation high in fiber which includes grasses and leaves. Insects and eggs will also occasionally be included in their diet. Chinchillas will not take a bath using water. Their coat is too thick that it will not dry completely. They will take dust baths to keep their fur clean and healthy.

Chinchillas do mature at 8 months old. Their gestation period is 111 days and the female will have 2 litters a year. Each litter will have on average 2-3 young but can be as many as 6. The kits only weigh about 1 ounce when born and their eyes are open and fully furred when born. The kits will nurse from it’s mother for 2 months.

The best housing for a chinchilla is a tall wired cage that is at least 24" wide and 24" deep. They do like to climb so include ladders and shelves for your chinchilla to enjoy. A chinchilla will chew any plastic caging or shelves easily. You can use newspaper , pine or aspen shavings for the bottom of the cage. A litter box can also be placed in the cage for them to use. The cage should be placed in a quiet area of the home that stays cool. A chinchilla can not take heat well and should not be in an area that is over 75 degrees.
There are two species of chinchilla; chinchilla chinchilla and chinchilla lanigera. Both are rodents and are slightly larger and more muscular than squirrels. One of the distinguishing features of the chinchilla is their fur. Among all of the land mammals, chinchillas have the densest fur, with 50 hairs growing from a single follicle. On one square centimeter of their skin, they can grow up to 20,000 hairs. Their fur is so thick that fleas actually suffocate in it and therefore cannot survive. Their fur can be white, gray, black, beige, or silver. This fur is, in a way, how the chinchilla got its name. The Chincha people of the Andes used to wear its dense fur and it was then named accordingly. Because of its fur, however, it was hunted and has since become quite rare. Most chinchillas that are now used for the fur industry are raised on farms. Some chinchillas are domesticated and kept as pets. These domesticated chinchillas are descended from the chinchilla lanigera species. They have a longer tail, thinner neck and shoulders, and longer ears than the wild chinchilla chinchilla, which is now facing extinction and is quite rare. Even though they may look bulky, their thick fur is hiding an incredibly athletic frame. Among their other traits, chinchillas are fast jumpers and can jump up to 6 feet in the air. They can grow up to 10 and 14 inches long and have a tail that can grow up to 6 inches long. On average, they can weigh up to 3 pounds. They live active lives and can heal quickly. Even with their quick healing, as pets, they require a lot of dental care and exercise. This is because their teeth are always growing throughout their life and need to be controlled and monitored. In the wild, they keep their teeth under control by chewing sticks and twigs. Because they are unable to sweat, their environment needs to be temperature-controlled. In order to bathe, they take dust baths. Because of their thick fur, they do not bathe in water. Instead, they roll around in dust made of fine pumice. Their thick fur then resists parasites as well as loose dander.

Chinchillas are native to the Andes mountains in South America. There, they live in herds at high elevations. These elevations can be up to 14000 feet. They have also been known to live in parts of Bolivia, Peru, Argentina, and Chile. Today, they are mostly found in Chile. In these locations, they live in burrows or crevices in rocks, being the most active during the dusk and dawn. In order to find these creatures, fur traders used to use dynamite to blast open the rock to reveal their hiding places.
Behavior
When they are found in the wild, chinchillas live in social groups called herds. These herds can range from 14 chinchillas to 100. They do this both for the social interaction as well as protection from predators, which include birds of prey, skunks, cats, dogs, and snakes. If they are attacked, they have a variety of defenses, including spraying urine and releasing fur (sometimes known as the fur slip).

Because they are nocturnal creatures, they have an added layer of protection against predators. For their own food, chinchillas eat plant leaves, fruit seeds, and small insects. To eat, they sit on their rear feet and hold the food with the front feet. If chinchillas are kept in captivity, they can become stressed if they see another chinchilla getting their food first. This can even cause stress convulsions. When the animal is distressed, they can also show other physical symptoms. One of these symptoms is fur-chewing and excessive grooming that leaves uneven patches of fur. They can even chew the fur of the other animals in their cage. Other symptoms may be a refusal to eat, which can make them worse. Chinchillas that live in herds are especially sensitive during their breeding season, which is around February to March and August to September. Because they are social creatures, they are upset when their breeding mate is changed. Once they have a litter, they are generally small, around 2. At birth, chinchillas are fully
developed and can mate after 4 months. A chinchilla can live up to 14 years in the wild and 20 in captivity.

As pets, chinchillas are somewhat temperamental. Because they are more active at night, they do not like to be disturbed during the day. They are also very sensitive and do not like to be held. They can become very friendly to their owner but only if they are held as babies. By being held so young, they are more acclimated to human touch. During the day, they should be kept in a quiet area and their cage should have enough room to run around since they are so active. Because of their thick fur, it is best that they be kept at a cooler temperature. If the temperature is too high, they could overheat, due to their inability to sweat.

Conservation
Over the years, their population has dwindled and this is mainly due to over exploitation. Both species of chinchilla are listed as endangered and approximately 90% of their population has been lost over the last 15 years. Hunting being the main cause of this decline, there has been many policies made to help save the creatures.

Their fur is so popular because of its soft feel and is even in color, making it perfect for clothing. This desire for chinchilla pelts led to the extinction of one species of chinchilla already and is leading to the extinction of the other two. Because the animals are so small, it takes a good many to make any type of garment. Because of this demand, they are still being hunted, even with the legal policies in place. They are also still bred for their fur. Another way in which humans are exploiting chinchillas is through scientific
research. They have been used in research since the 1950s, specifically for their auditory system.