The Adventures of Buddy the Pissy Hedgehog Part II: The Reckoning

I think I’m starting to see a pattern here. It’s my wife. She’s the problem. Her choices. They’re all bad. Let me explain. You see, she chose buddy. Of all the cuddly and cute animals of the world she could have chosen, she picked the angriest (albeit cutest) unhuggable animal in the animal kingdom. The only creature lower on the unhuggable ladder below buddy is a jittery scorpion after a five-day crack bender. Seriously, there are a myriad of cute animals that are acceptable on the cuddly list she could have chosen like:

Like, I want to hug buddy. I want to snuggle him up to my cheek and say, “It’s ok buddy, you seem like you didn’t get enough hugs as a small hedgie…I’ll fill the gap.” But, he’s covered with needles and he bites. Seriously. He bites. The one part of him that is the cuddliest, his undercarriage, he hates to have touched. One day he woke up, unfolded from his spike ball, and was looking like Friar Tuck from Disney’s cartoon version of Robin Hood. I thought, “I bet he’d like it if I scratched under his chin.” He bit my thumb.

I’m trying to give him some freakin’ TLC and he gives me a, “Touch me again like that and it’s your jugular next, Fatty Ruxpin.” Fatty Ruxpin…wow, his words bite as harshly as his little hedgehog teeth. It’s not just me he bites. He bites my wife. He was tottering all over her torso one night and he stopped at her arm. Apparently, it was in his way and this offended him. He bit down on her wrist and began to drag her arm out of his way. She said, “Hey…” That’s it. Just…” hey”. Here’s how the conversation that followed, went:

Me: Did he just bite you
My Wife: Yeah, they do that. If they want to move something, they will bite it and drag it out of the way.
Me: You knew this?
My Wife: Yes. That’s what the lady I purchased him from, said.
Me: …and you still bought him?
She would have answered me, but he was biting her again.

Here are a few things I can tell you about hedgehogs, you know, so you don’t walk away from this missive without some sort of knowledge. They like dried mealworms. It’s the only thing he likes outside of running on his wheel like a hedge obsessed. If you put a bowl of them in front of him, he will eat them like a maniac making a distinct “kyowmp, kyowmp, kyowmp” sound as he chews. Also, he has a morning routine. I’ve illustrated what that looks like every day when he wakes up. I’ll say, “Good morning, buddeh”, and then he does this: 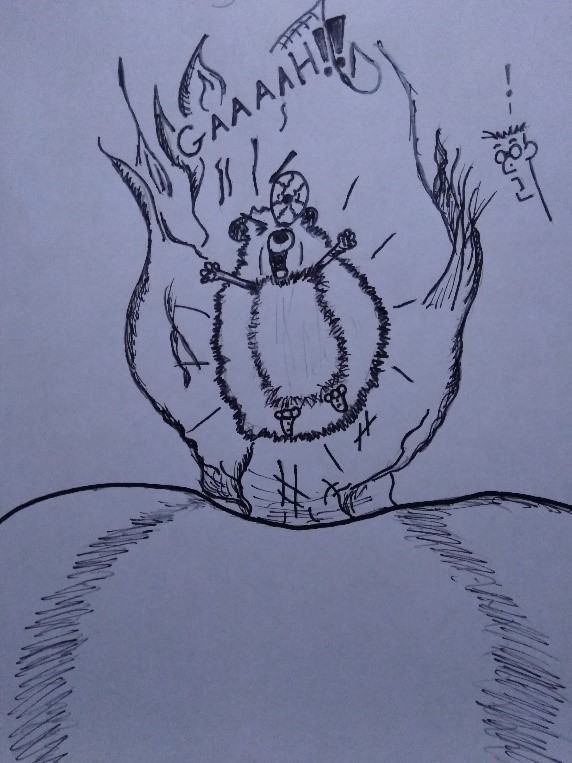 Next time I’ll be telling you about the new puppy we brought into our home named ‘Jack’. He’s a Jack Russel Terrier mix. He and Buddy met…