When most people think of domesticated animals, skunks usually don’t come to mind, but these North American animals that are often sighted in backyards, striking fear in suburbanites, can make good house pets just like rabbits and ferrets. These skunks have their scent glands removed, so there is no risk of you or your dog getting sprayed by these unusually pretty mammals. As long as they are given the proper care and new owners have reasonable expectations of them, as they are not dogs, cats, or ferrets, skunks can make for intelligent and playful companions. 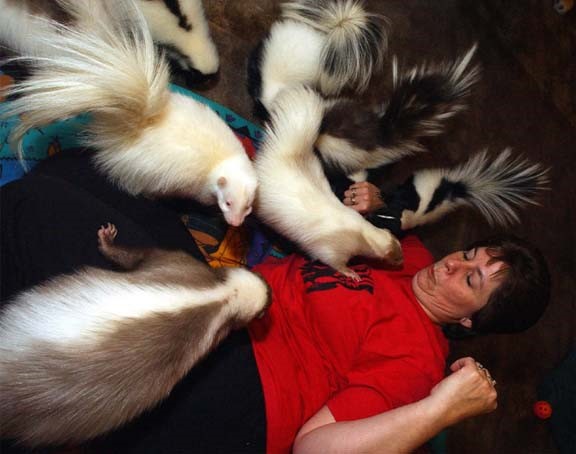 Skunks have gained such a prominent following as pets that there is even a festival called Skunk Fest in North Ridge, Ohio, celebrating the animals. Skunks can even be shown in skunk shows, as they come in different color morphs just like rabbits and birds. Animal Planet, a network that tends to have distaste for exotic pets, has featured them on the show Pets 101.

Unfortunately, skunks are illegal to own as pets in most states due to being ‘less popular’ and being rabies vectors. Skunks are also considered to be wildlife, regardless of their long history of being captive-bred (pet skunks should never be removed from the wild, and this is illegal in even more states). In some places, like Florida and New Jersey, permits are issued for pet owners, but most states will only issue permits to USDA-licensed facilities that are using them for educational purposes, so don’t think that private owners can be eligible to obtain them. To find out if skunks are legal in your state, you will need to do your own research. Be sure to check the rules in your county, city, town, and neighborhood association as well. 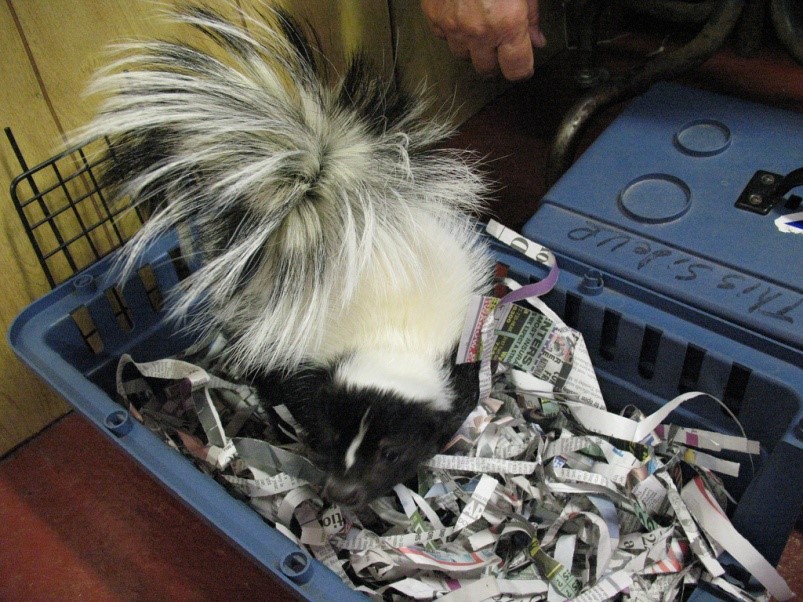 “pet skunk named snickers” by xinem is licensed under CC BY 2.0

When it comes to caging your skunk you can get creative. The ideal enclosure may be a room dedicated to the animal, but this isn’t practical for most people. The bigger the cage, the better, but you can substitute playtime if you use a smaller cage. Minimally, the cage should be long and wide enough for the skunk to maneuver and play. A cage for terrestrial animals, rather than a tall arboreal cage, is preferred. However, skunks can still climb, so adding levels is a good idea if the cage can’t be longer. A double-wide Critter Nation-type cage may be a good minimum for this medium-sized animal. Other ideas can be a large rabbit hutch-type enclosure with an attached exercise area that can be a dog pen with a lid or a constructed C&C panel cage. Whichever you choose, be sure that your skunk is comfortable and that the enclosure cannot be destroyed by it. Skunks can be very persistent when it comes to digging at corners and attempting to make their getaway.

What does a skunk eat? 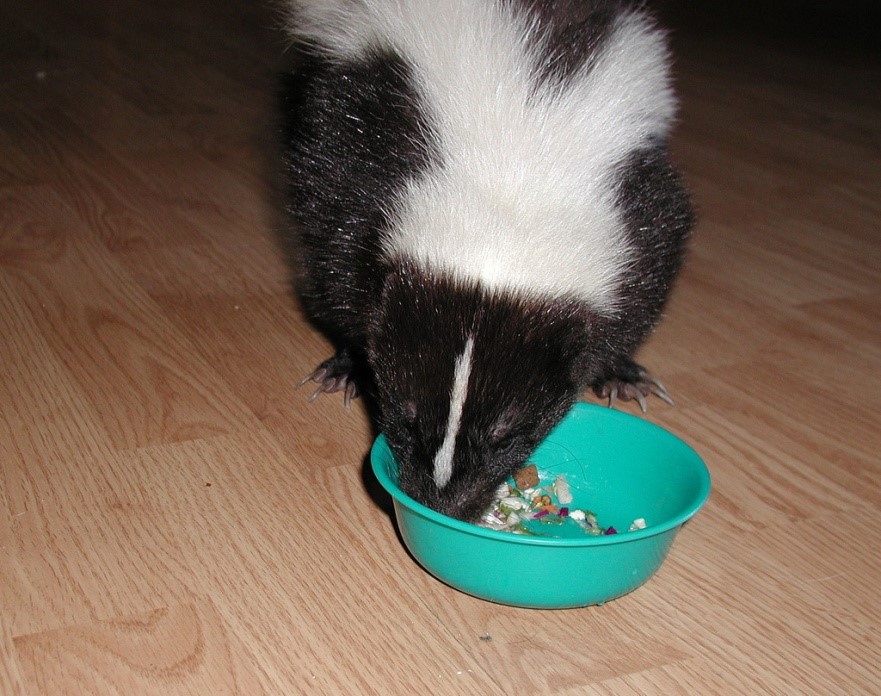 Skunks are omnivores and can be fed a wide range of foods, including vegetables, fruit, commercial low-fat dog food, and others. It is a good idea to rotate food items to satisfy this omnivore’s need for variety, and this will also help ward off health problems from overfeeding one food item. Other offerings can include nuts, various low sugar cereals, beans, boiled chicken, pasta, cottage cheese, live or freeze-dried insects, and eggs. To form the base of the diet, you can choose a healthy, nutritionally-balanced kibble developed for skunks. It’s a good practice to avoid foods that are considered unhealthy or toxic for dogs; these lists can be found all over the internet. Asparagus has been reported to give skunks seizures.

Strangely enough, while much of the public ignorantly looks down on owning exotic animals as pets, skunks are enjoying increasing popularity as traditional pets. Their care, compared to other exotics like foxes, monkeys and kinkajous, is less involved and they can fit into the lifestyles of more committed owners. That being said, skunks are still considered to be relatively ‘high-maintenance’ pets.

Similarly to a dog, giving your pet skunk daily interaction is not optional. Skunks require socialization and out-of-cage time to remain mentally stimulated. Unlike other domesticated animals, they can be rambunctious, stealing items and having little regard for ‘house manners’, so they require supervision or a very-good ‘skunk proofed’ room to play in. It is also extremely important that skunks don’t find their way out of the house, as they lack the homing instincts of dogs and cats and it is unlikely that they will return. Most skunk breeders recommend neutering and spaying, as this is said to have a dramatic impact on some of their behavioral problems. 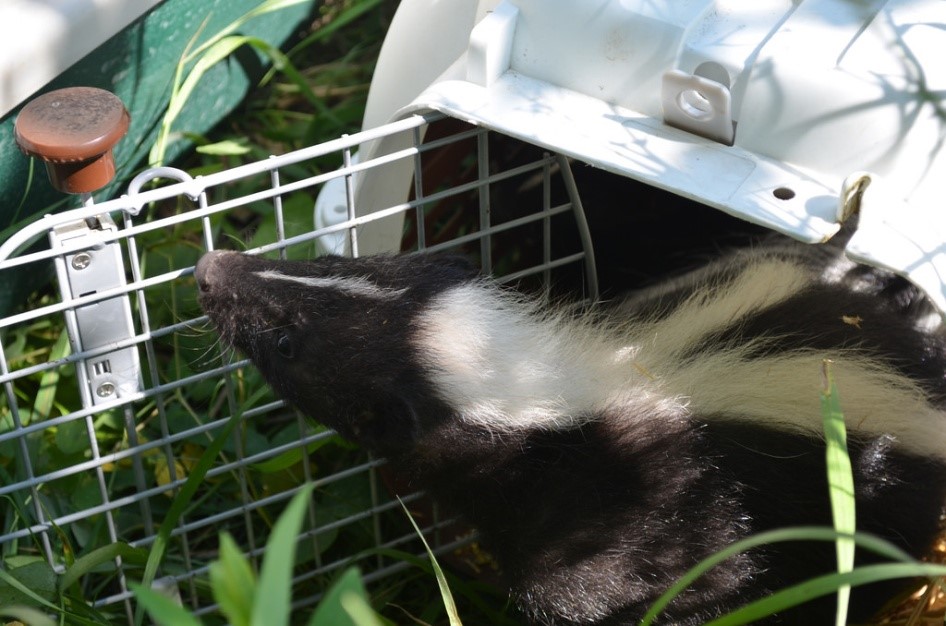 Edmonton and Area Land Trust (CC BY 2.0) Via Flickr

One negative aspect of skunk ownership is finding a veterinarian that is willing to treat it. Unfortunately, as exotic pet owners still face a lot of prejudice, there are prevalent misconceptions that skunks are dangerous or that they will transmit rabies. While skunks can be vaccinated against rabies with a killed-virus vaccine meant for ferrets, lawfully, they will always be considered unvaccinated. This means that if they bite or even scratch someone and that incident gets reported, the skunk will be confiscated for rabies testing which requires euthanasia.

This unfortunate circumstance is due to skunks’ lesser popularity. Dogs, cats, and ferrets all have approved rabies vaccines because they were popular enough for research to be funded for that need. Skunks, foxes, raccoons, and captive bats never will, and law makers are more focused on banning them as pets than encouraging the development of vaccines for them. When sourcing a veterinarian, one with ‘zoo’ or ‘wildlife’ experience, preferably board-certified in exotic pet medicine, is best.

It is recommended to neuter or spay a pet skunk at 4 to 6 months of age in order to prevent unwanted scent marking that skunks accomplish with urine dribbling in various places. Neutering and spaying is also believed to decrease the threat of various health problems. As far as vaccinations, skunks can receive inoculations for distemper and rabies. Some owners prefer not to vaccinate however, due to some animals having negative reactions to the product. When you bring your skunk in for its first vet appointment, you’ll want to have them checked for parasites. A blood test is also a good investment to ensure you have a healthy baby. Vet care is a very important aspect of pet ownership that should not be overlooked.